The new footbridge, designed by Addison Conservation and Design sits over the River Tweed. 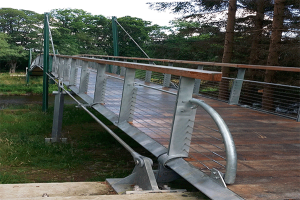 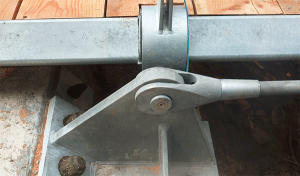 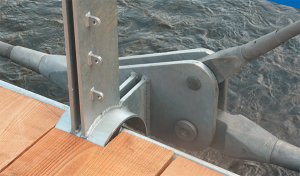 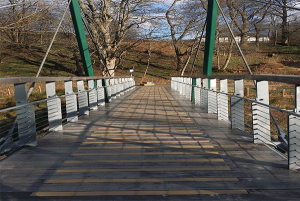 Guaranteed to be highly popular with cyclists and walkers alike, the bridge extends the Sustrans National Cycle Network between the towns of Peebles and Innerleithenbetween providing splendid views of the river and the forested hills on either side of the valley. Corrosion protection of the steelwork was of optimal importance. The bridge which is also designed for horseriders, consists of 2 m wide timber deck, a fully galvanised steel structure with 4 overpainted pylons and unique post tensioned macalloy stabilisers which were designed to run parallel to the timber deck.

The stabilisers are unique features which were also designed to assist stability during construction by being strung over first and tensioned. They also allowed the stays to be pretensioned ahead of the deck going on and carry the horizontal components of the stay forces, thus allowing the deck structure to expand and contract without affecting the stiffness of the supports.

The handrails are 1.4 m high to accommodate cyclists and horses.

There are some 2000 miles of cycleway in Scotland. Since it opened, it has been of huge benefit to communities along the route and to visitors to this area. The bridge was designed by John Addison at AC+D with check calculations carried out by Murray Associates Engineers Edinburgh.

Thanks are due also to Artist Jeremy Cunningham who assisted Sustrans at the early stages of the contract and encouraged John Addison to develop his blend of context, aesthetic and pragmatism at a scenic location.