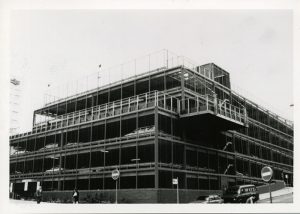 Many Brummies probably pass by Brunel Street car park without giving it a second glance. Sited near the heart of Birmingham city centre, between a busy, part-elevated road and a shiny new development of cafes and restaurants, its appeal is softer and more subtle than your average multi-storey monolith.

In 1988 Brunel Street car park represented a new model in car park design. With a lighter, semi-permeable structure, it embodies the philosophy that the functional should work aesthetically too. Planters and cantilevered balconies offer up a softer profile than that of its usual concrete contemporaries and demonstrate how considered landscaping can play an important role in achieving a sympathetic design ethos. The multi storey steel-framed design with long spans provides ramped, column-free parking for 390 cars.

At the time of its construction, a 20 year maintenance-free life was considered the target for the specifiers.

Construction for the car park started in November 1987 and was completed a mere 35 weeks later in July 1988. All 350 tonnes of structural steelwork were hot dip galvanized whilst the perimeter cladding of galvanized steel mesh, with a ‘V’ profile, was powder coated in poppy red. At the time of its construction, a 20 year maintenance-free life was considered the target for the specifiers.” 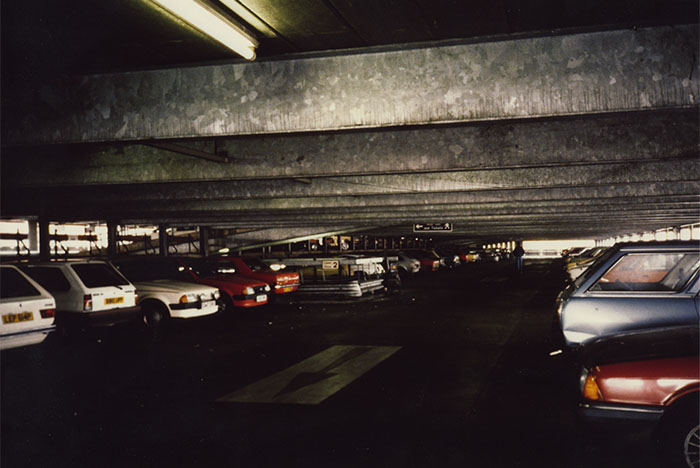 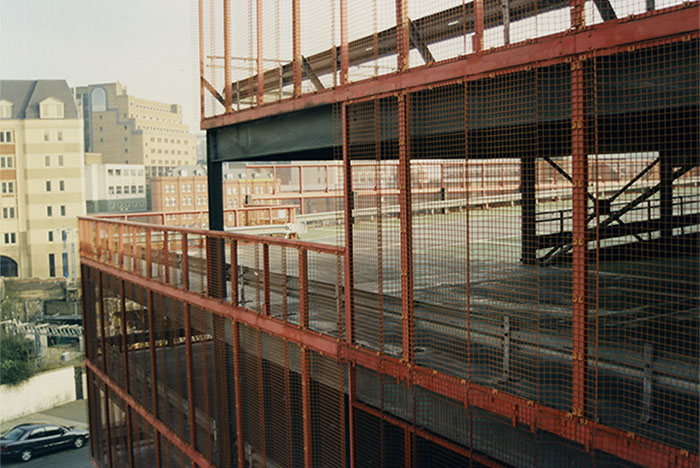 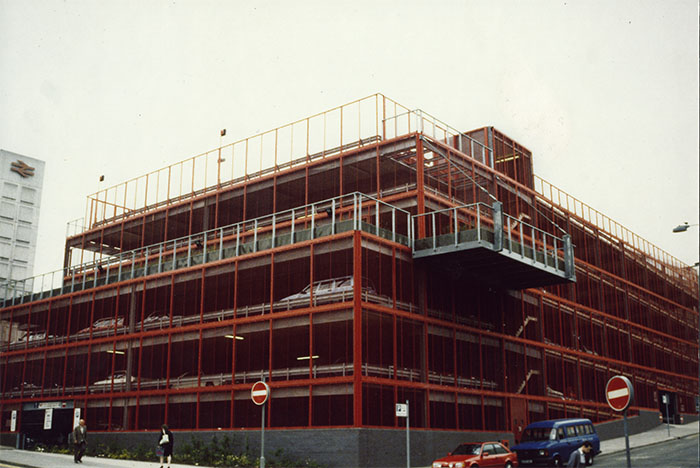 2013 marked Brunel Street car park’s silver anniversary and during this lifespan the structure has witnessed the rebirth of Birmingham.  This has included the construction of Symphony Hall, the redevelopment of the Bull Ring, the resurrection of Birmingham’s central canal network and, more recently, the new Birmingham Library. In that time, the Brunel Street structure has taken all that traffic and more. 25 years on, the red wire mesh cladding still creates a colourful and interesting feature when approaching the car park. On a sunny day, reflected light helps to give it an additional dimension creating both an opaque and translucent façade, depending upon the angle of view. 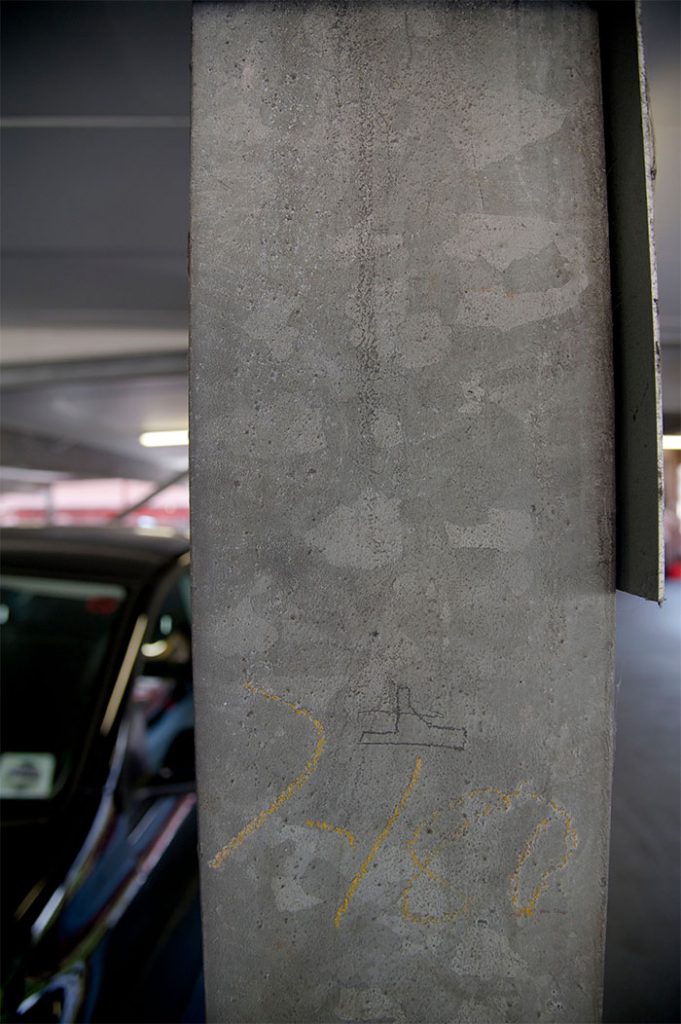 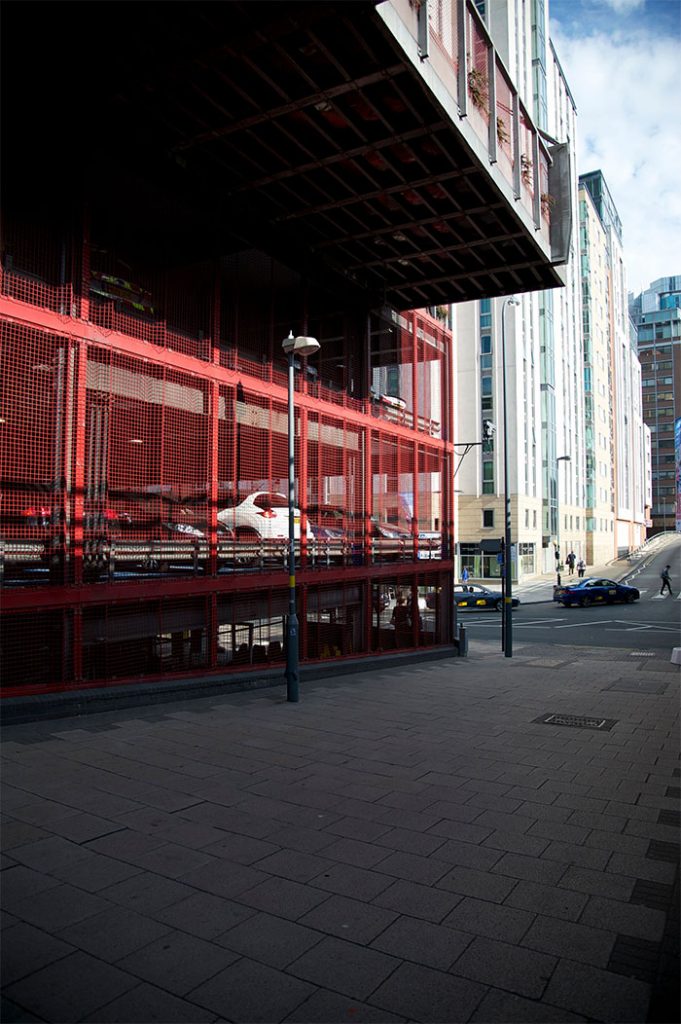 The planter insets and balconies are still in use and provide an interesting mix of colour and structure. Internally, the galvanized steel has developed a dark grey patina. Some structural beams look virtually identical to when they were first erected 25 years ago. In other areas the natural, abstract shapes of zinc crystals within the galvanized coating have been revealed.

A 25 year maintenance-free life has already been achieved at Brunel Street car park. It may not be over-optimistic to hope for at least double that.

Over the last quarter of a century, car park design has entered a new era and the technology of parking has changed beyond recognition from the late-1980s and in this respect, many changes have taken place within Brunel Street. However, the simplicity and honesty of its original design still competes with its contemporaries.

A 25 year maintenance-free life has already been achieved at Brunel Street car park. It may not be over-optimistic to hope for at least double that.