One of the first facade projects in Germany to use hot dip galvanized steel was the Rhein Polder Söllingen-Greffern’s operations centre. Designed by the architects Günter Leonhardt & Associates, it was commissioned in 2005 and is central to the Rhein flood management programme.

The Rhein Polder at Söllingen-Greffern, near Baden-Baden, has a flood plain which can take 12 million cubic metres of water from the Rhein during periods of flooding. It forms part of a programme for reducing the flood risk for cities and towns downstream. To protect the operation at high water, about 100 structures were erected in 2005, ranging from simple gaps within embankments to a central control station. Water can be pumped out of the river if levels are too high.

A central role in flood defence

The water arriving over the land from the tributaries of the Rhein, or at the Wörth and Acher trench, is pumped into the flood plain of the Polder over the embankments. All the structures of the Rhein Polder form part of an overall design concept within which galvanizing has played a pivotal role.

This is particularly true of the central control station, the pumping stations, and the smaller local technical buildings. Since the structures mainly lie away from populated areas, they were built to be robust and vandal-proof. Technical apparatus had to be guaranteed the necessary protection, even when operating personnel were not present.

Günter Leonhardt & Associates integrated the buildings into the embankment structures with the result that the architecture became an integral part of the structure, combining with the surrounding Rhein landscape. 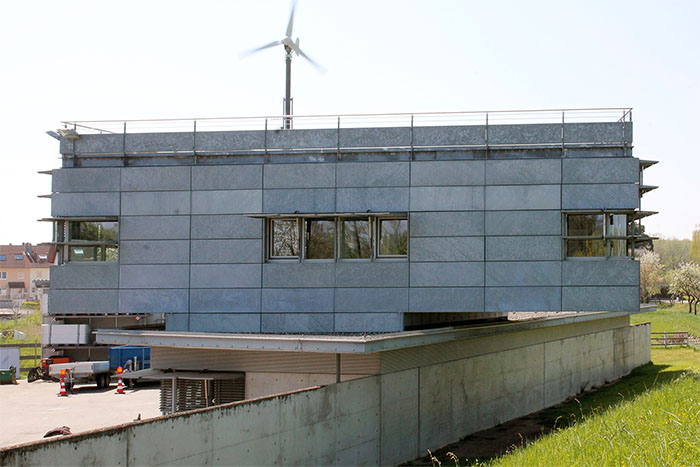 An inspection of the centre by the Institut Feuerverzinken in April 2016, included inspection of the exterior facade for the operations building. It found that the cladding is in excellent condition after 11 years with no signs of distress to the coating.

Thickness measurements revealed a zinc coating thickness of 65-75 micrometres, which should provide a further 50 years of protection (60 years in total). Photographs taken during the inspection show a pleasing patinated zinc surface which after more than a decade of exposure to the elements, has a significantly more matt appearance, as can be seen in a before-and-after comparison.