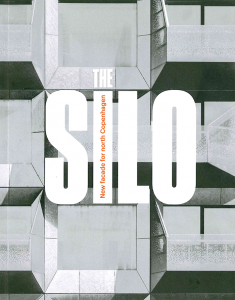 The Silo is part of the transformation of Copenhagen’s North Harbour, a vast post-industrial development that is creating a new city district. Designed by COBE with clients Klaus Kastbjerg and NRE Denmark, this former grain storage facility, the largest industrial building in the area, has been reinvented as ‘The Silo’, housing residential apartments and public functions.

History & Soul of the Grain Silo

The Silo, a 59m tall, 13 storey concrete grain store, formerly owned by Danish agricultural cooperative DLG, ceased use in the 2000s and had become derelict by 2008 – its machinery abandoned and its silos filled not with grain but pigeon muck building up over time.

Together with its ‘little sister’ grain silo attached by high-level lean steel bridge behind, and a separate double circular-plan silo on the opposite side of the wharf pier, COBE identified these buildings as possible landmarks for the area that could continue the existing urban grain. In a future district, nearly all built from scratch, they would stand taller than the majority of upcoming development around and thread together past with present.

‘We wanted to keep some of the history and soul of the area’ explains Caroline Nagel, project director and architect at COBE who worked on The Silo, as it has become known, since the beginning.

The Future of the Converted Grain Silo

‘Nordhavn will be a mix of existing structures which previously had another meaning but are transformed.’ COBE’s dilemma, however, was how to transform the silo into a new urban anchor point that would function as high-end contemporary housing while confessing to and retaining the building’s original solid, yet elegant and slim, robust closed character. After all, for his new apartments the client wanted big windows with big views and balconies with glass balustrades as well as all the necessary thermal comfort. 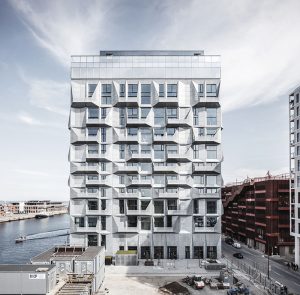 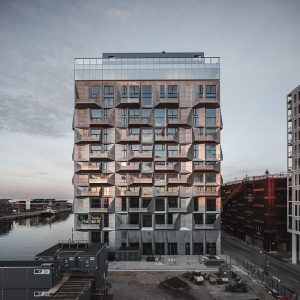 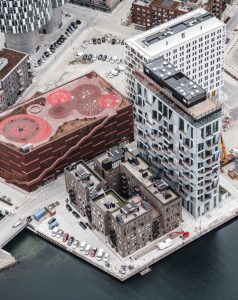 Ultimately, COBE decided that the way to capture the spirit of the building and most effectively disseminate its architectural heritage was to keep the spaces inside as close as possible to  their original state, tall and concrete, because the same kinds of spaces would never be built now.

On the exterior, however, the idea emerged to give the building a new thermal cloak or climate screen skin that would integrate the balconies to appear as one element and look as closed as the concrete had behind. There wasn’t a single moment of inspiration, but once COBE realised the facing material needed to be flexible and lightweight to do that, the project architects quickly came to metal and galvanized steel, for which The Silo has become a tour de force.

From a distance, the building appears light against lower, dark development – as forecast in the city plan. The shadows cast by its angular multifaceted facade are so crisp that the building looks as much like a blown up rendered drawing in real life as it does in photographs – even when not in the sun. Colourful reflections from the wharf to the north and buildings around create a psychedelic complex of overlapping shadows that add character to the surface.

The facade has a continuously changing crystalline urban effect that contrasts with the matt all around. Its original monumental appearance lives on. Get closer, and the variations become more profound. Patterns of perforations in the protective balcony wind shields and balustrades play a flickering game from transparency to opacity. The patina of the building’s surface glistens.

For the cladding itself, COBE searched for an ‘honest’, ‘lively’ material that would resonate with the industrial heritage of Nordhavn and carry The Silo’s existing spatial qualities. It wanted to recreate a single material envelope that could adapt with projections and facets – folding in and out to integrate the deep terraces. 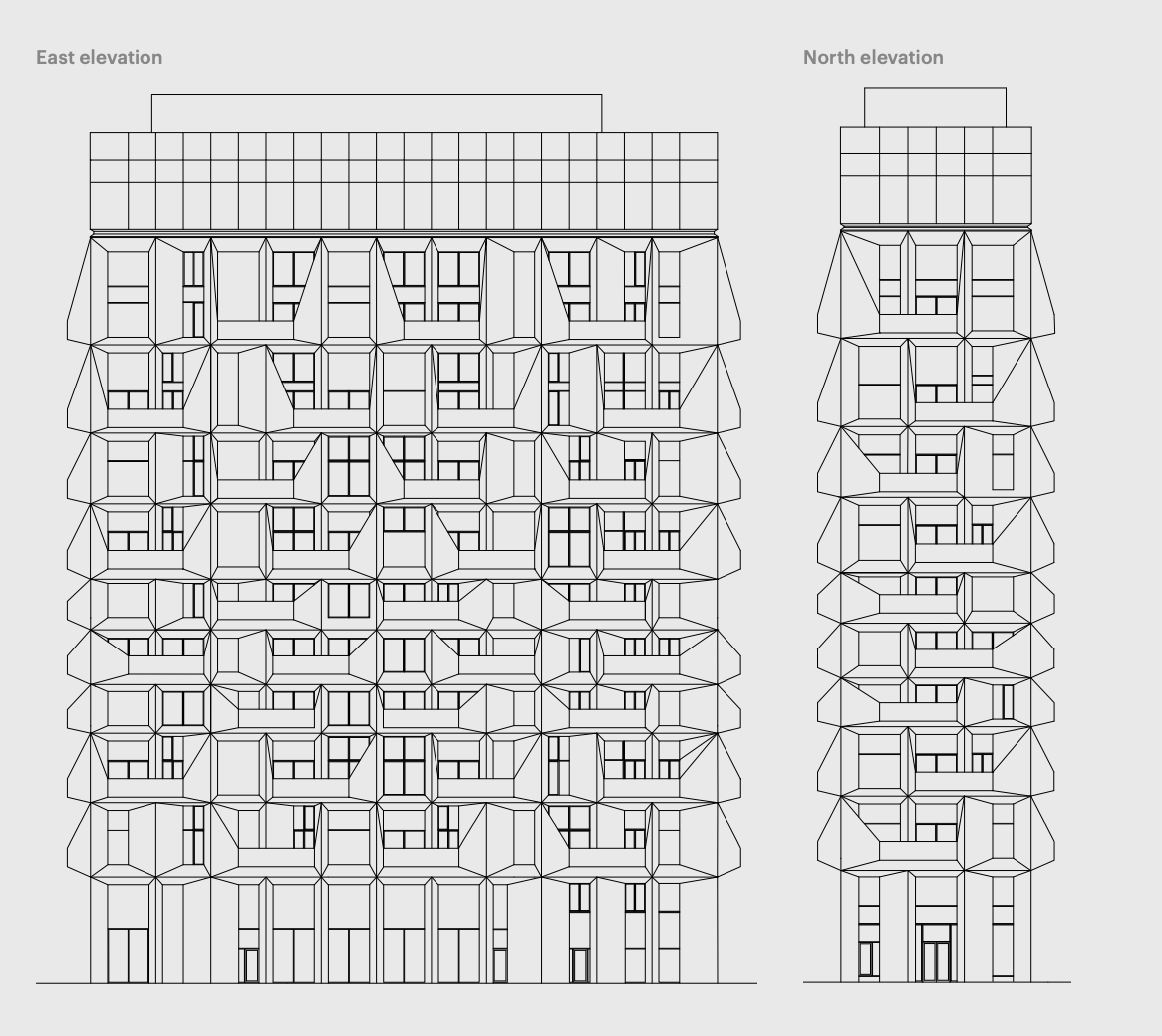 Although COBE had not used batch galvanized steel in this way before, the choice was inspired by Andreas Fuhrimann Gabrielle Hächler Architects’ architect’s and artist’s house, Zurich, Switzerland, as well as Carmody Groarke’s artist’s workshop in London (2012), both of which use it in a much simpler manner.

Perforations in the steel cladding designed in advance by the architect allow big views out of apartments but also retain privacy for residents within. They add an extra texture too – each perforated panel is ever so slightly different from the next.
The decision to use batch galvanized steel (to EN ISO 1461) was not, however, straightforward.

The client and contractor, NRE Denmark, wanted to use aluminium instead, perceiving it to be cheaper and easier to install. To inform the decision process, the client commissioned analysis from the Force Institute, a private organization in Denmark that carries out research into building materials, to study and investigate the advantages and disadvantages of both materials in their various forms – durability, required coatings, possible fixings and cost. 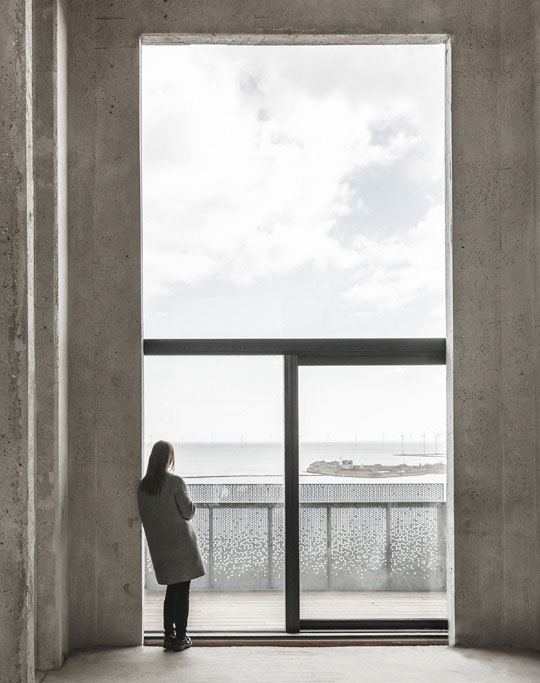 Working with the facade contractor Skandinaviska Glassytem, who came on board after the initial sketch design, COBE and the team made study trips all over Denmark to show the client galvanized steel in action, including to the all-clad Technical School at Roskilde completed in 2013, again by Christensen & Co, as well as example facades made from aluminium. 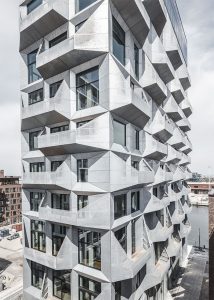 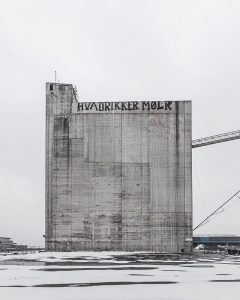 In 2015, they also set up a 1:1 prototype of the cladding options to help the decision process, which is also part of the requirements to get planning permission for tall buildings in Copenhagen. The prototype facade, which also looked at possible glazing frame colours and the possible dimensions between rainscreen panels, tested the various material options to compare them aesthetically, one set against the other over a six-month period. It was shown to the client and contractor as well as the city council representatives. 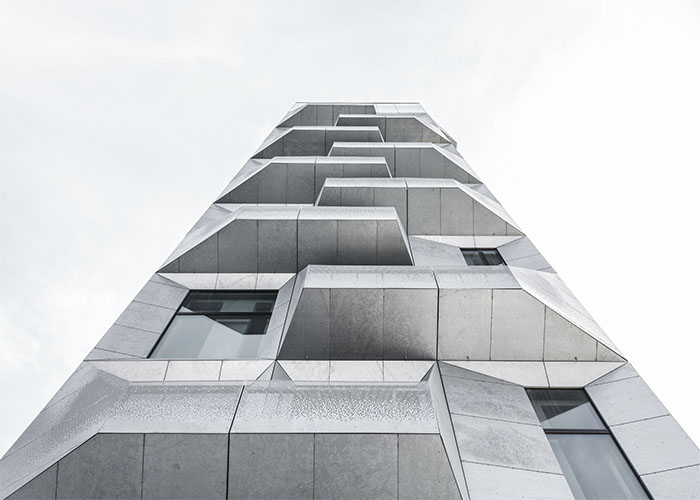 In the end, the final decision to adopt the batch galvanized steel cladding came down to the material’s more interesting, playful and lively character as well as comparative cost and the Force Institute’s advice on life expectancy.

‘We put a lot of energy into making aluminium plates look like galvanized steel,’ says Haris Kapsis, the project manager at Skandinaviska who worked on the project from detail design. ‘Ultimately, aluminium was more expensive because it wasn’t a simple plate; the different coatings added to the price.’