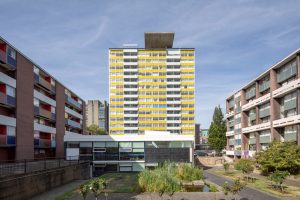 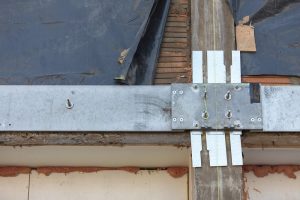 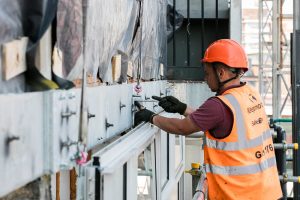 John Robertson Architects (JRA) has completed the re-cladding of Great Arthur House for the City of London Corporation, a Grade II listed landmark, part of the Golden Lane Estate originally designed by Chamberlin, Powell and Bon and completed in 1956. Influenced by the work of Le Corbusier, the design of the Estate was regarded from the outset as a model of social integration with early tenants including doctors, police officers, secretaries, cleaners and caretakers – with an emphasis on one-bedroom flats for single people and couples.

The new cladding replicates the delicate extruded profiles of the original 1950s facade, together with the distinctive use of yellow glass. The new facade improves the performance of the original windows with a double glazed and thermally insulated prefabricated panel system. The project involved extensive consultation with the City Planners, 20th Century Society and Leaseholders and tenants. 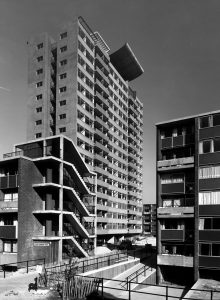 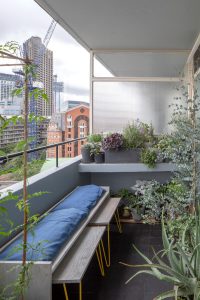 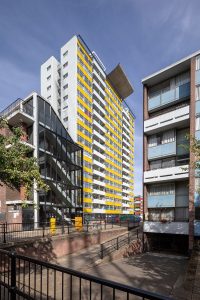 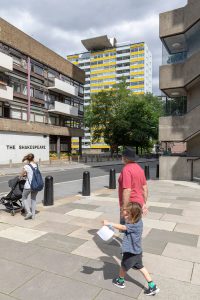 The new double-glazed curtain wall effectively doubled the weight of the existing cladding system and so strengthening of the existing reinforced concrete slab edges was an important part of the project. Hot dip galvanised steel plates (6135mm x 250mm x 12mm) were designed to reinforce each slab edge between apartments. These plates also had the dual function of providing fixing points for the new curtain wall – which transferred the load of the new façade into the concrete structure, close to the vertical shear walls. Galvanized steel was selected because of its inherent strength, stability, versatility and longevity.