Green Tower at Nando's in Basingstoke

The concept of the cylindrical “Green tower” was designed by STAC architecture for Nando’s new restaurant at Basingstoke. The design was a double helix that formed a framework to support a series of planted vegetation using recycled tyres. The engineering details were for the fabrication undertaken by DP Structures Ltd, who specialise in the design and manufacture of bespoke architectural steel fabrications. There were a few critical factors in evaluating the concept given to us. The main issue was to design the structure strong enough to support the panting and also make the cylinder transportable and allow a crane to install the design safely.

The finish coating was intended to be a natural steel colour with a clear powder-coating, however with the size of panels being so large it was limited on finding a powder-coating oven big enough to accommodate them. 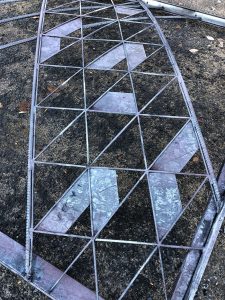 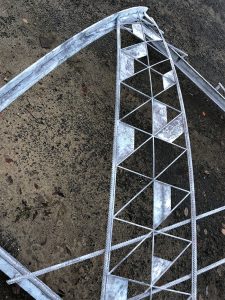 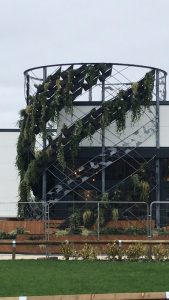 This proved difficult so resulted in using the galvanising process.

An area of concern was the delicate geometric panels in 3mm steel which formed the decorative bands that wrapped around the piece but due to the fact that each panel was curved then the usual distortion that occurs with welded sheet-metal didn’t occur.

This was applied to the finished surface and on contact reacts with the zinc and turns the coating black and grey. After a few applications the dark steel grey finish was achieved.

The panels were then delivered to site on a low loader, in sequence, and then craned into position. At every connection there were two PFC channels that formed the columns. The columns were then bolted to the foundation. Part of the structure that went above the roof formed a full circle which was secured to pre-installed brackets on the building.

The internal part of the cylinder then was installed to give the illusion that the cylinder had bisected the building and enhanced the exterior and interior space within the restaurant and continued the styling running from the outside to the inside.