The Hulme Estate buildings contain 50 flats and maisonettes together with 1500m2 of nonresidential space to be used as studios, offices, retail units, workshops, a theatre and a cafe. These unique buildings were designed by their future tenants in conjunction with the architects and developers. One of the main criteria was that the buildings should have a very low maintenance requirement. Consequently, all of the external structural steelwork was hot dip galvanized and should have a life of at least 30 years before needing maintenance.

“The buildings, arranged in a U-shape around a courtyard, had to look good, but also be economical to build and maintain” said Dr Mark Swenarton, the judge of the award for the best use of galvanized steel in architecture.

“Galvanized steel is used for bridges and spiral stairs linking the flats and also for the walkways and balconies to the individual flats. Offset against the brick and timber cladding, the self-finish galvanized steel elements animate the courtyard elevations and help make what is still an economical building into something really special.” Dr Mark Swenarton, Editor of Architecture Today 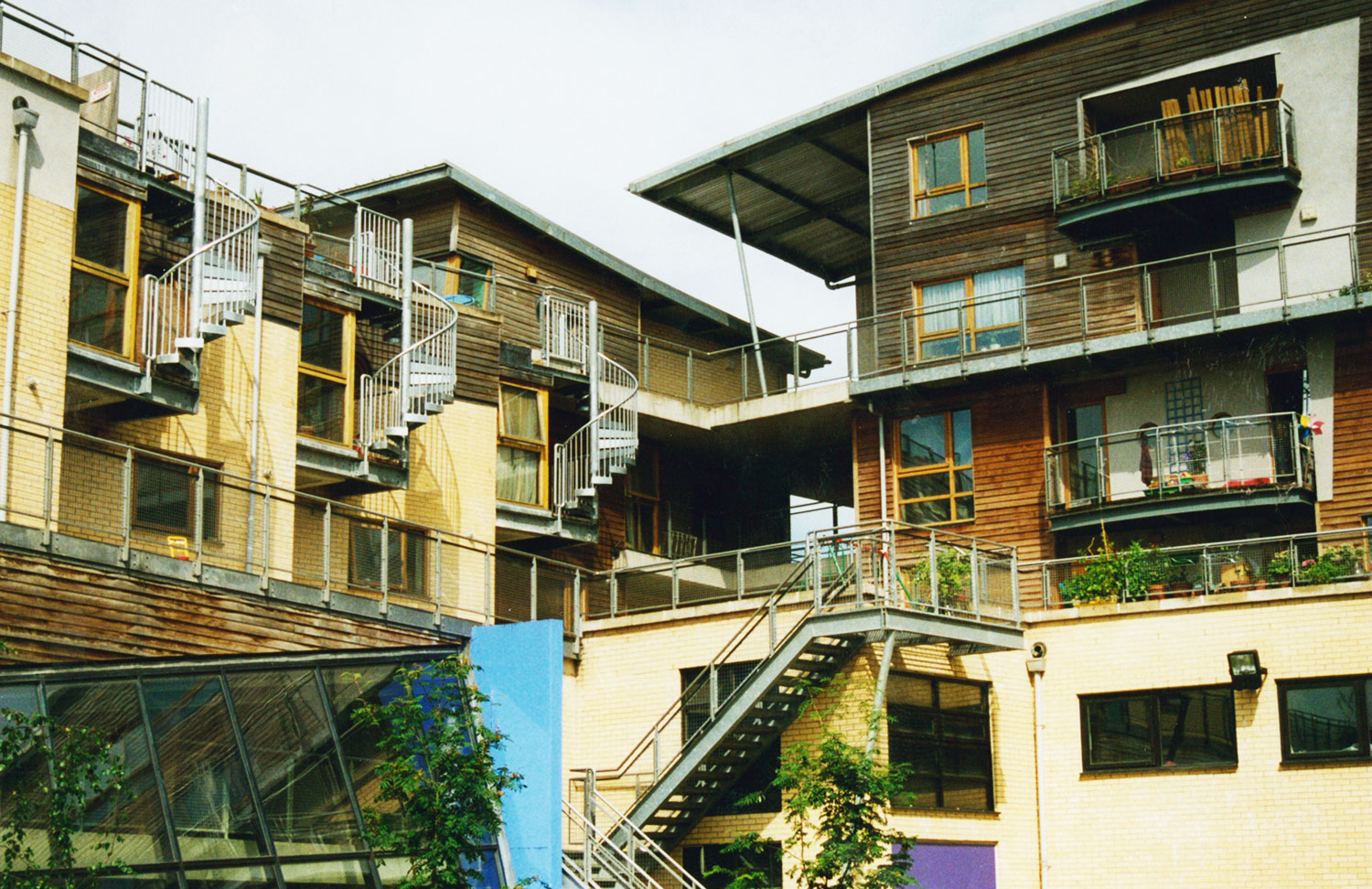 Few tenants have the opportunity to influence the design of the building in which they will live. Given this opportunity, even fewer would then use a high rise, high density, 1960’s housing estate as the model for their new home. And if they did, the result would not be expected to receive critical acclaim from the architectural profession.

However, this is exactly what has happened at the Hulme Estate in Manchester where a well-designed, low-maintenance building has risen out of the rubble of some of the worst of the post-war system built housing, lighter, open, galvanized steel structures have replaced dark concrete walkways and staircases. Wood is used for private balconies, bridges and cladding and turf for roofs that double up as gardens. 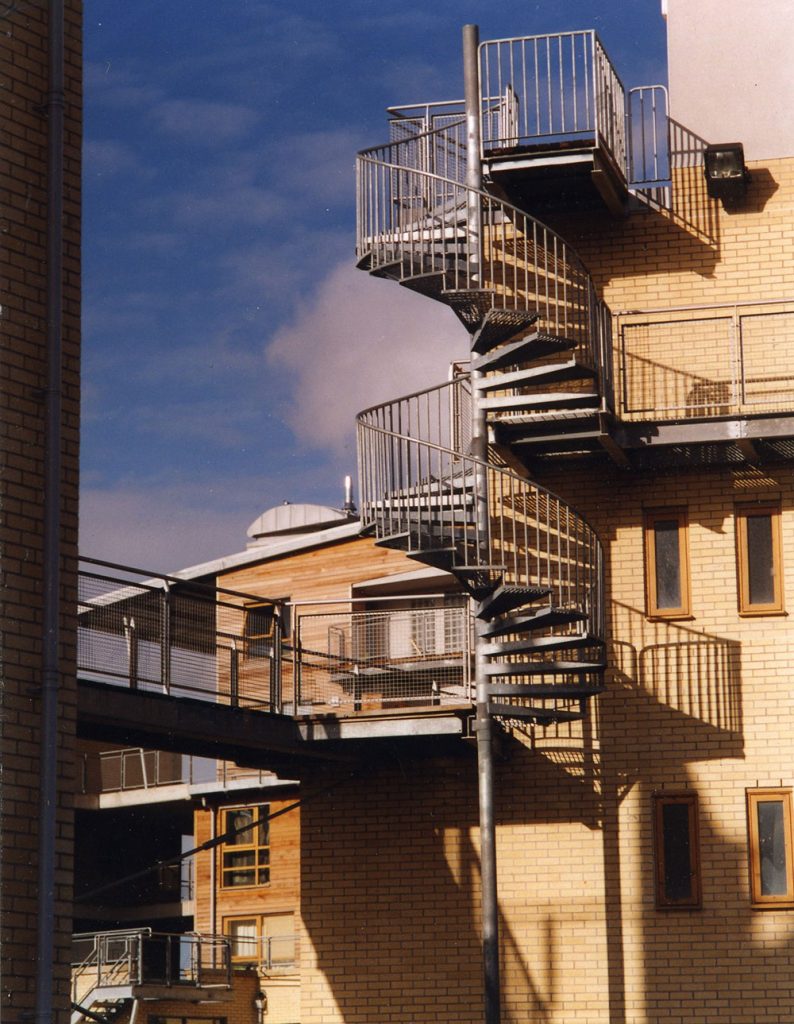 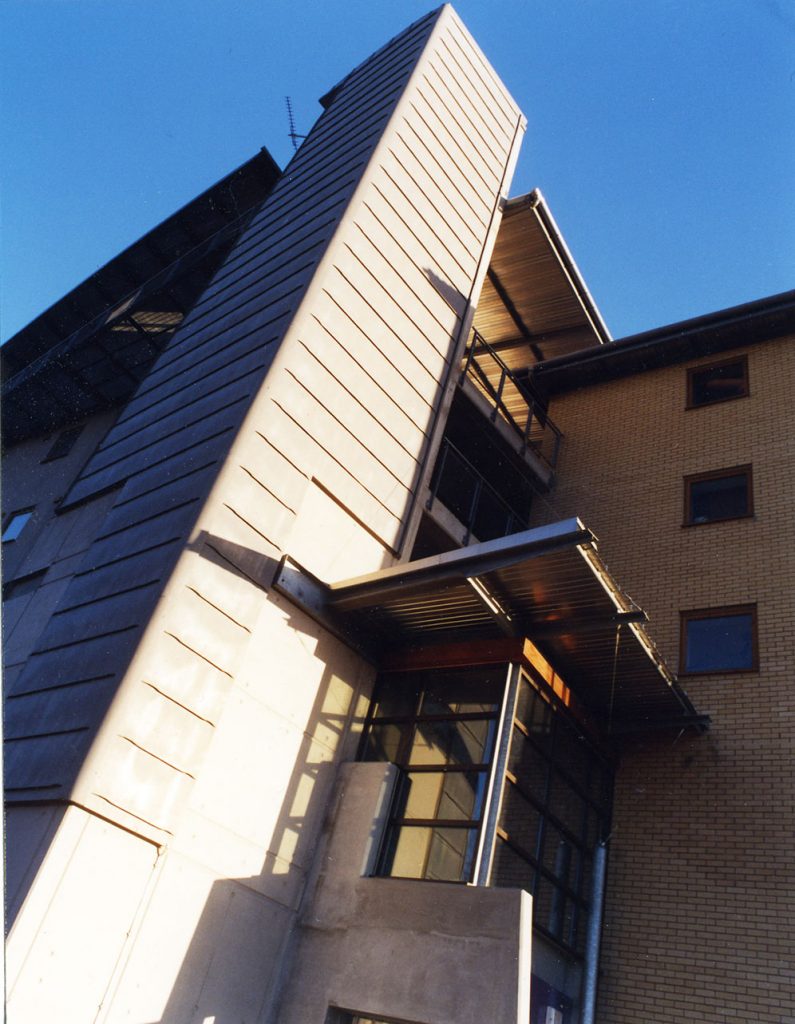 The story began in the 1960’s when the local authority began to replace the drab Victorian terrace housing in the Hulme area with bold, new, spacious, high density, high-rise housing blocks. Although welcomed at the time as being a considerable improvement on the Victorian houses and applauded by the architects in other city councils, the new blocks had both psychological and physical drawbacks for the tenants.

The warren of access decks was found to be threatening and disorienting and there was a lack of usable open space. Also, draughts, noise penetration and condensation problems resulted from the low quality precast-concrete construction. By the early 1970’s, families were demanding to be moved out and this lead to the present policy of building low-rise family homes with gardens and demolishing all the high-rise blocks. As these disgruntled families moved out to suburbia, a new generation of mostly young people moved in to the estate. This was a rich counter-culture of students, squatters, artists and followers of alternate life style. They found that the deck access, high-density housing suited their ideal of living as a close community. Also, the spaciousness of the apartments allowed many of them to start up their own cottage industries in art, music and textiles.

Out of this grew two co-operatives – Homes for Change and Work for Change – with the aim of developing accommodation which would allow them to perpetuate their communal lifestyle. In 1991, the Hulme City Challenge was set up with government funds to develop the Hulme Estate. It was through this that the co-operatives managed to find a partner, Guinness Trust, to work with in obtaining first of all funds, then a site and finally developing it. 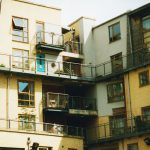 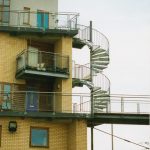 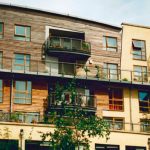 One of the first major decisions was the choice of architect. The members of the co-operative did not want a recognised community architecture practice with fixed ideas of what could, or could not, be done. Instead they opted for Mills Beaumont Leavey Channon, a relatively young practice with a reputation for eye-catching modern offices and university buildings. At the same time they set out their ambitions for the building in an information pack.

“We want to give people the space to grow in a building that combines shops, workshops, artist’s studio space, community facilities (laundry, car maintenance), gardens and living space – so it’s not just a 9 to 5 or even a 5 to 9 building, but a city that never sleeps! Not only is this exciting, it is also more secure; there are people around and we know them.”

After five years of committee meetings, consultations and official vetting, this ambition has been translated into the finished building. It consists of a courtyard bounded on two sides by six-storey blocks and by a four storey block to the west.

These are arranged in double-deck layers with the lowest layer devoted almost entirely to workspace and the upper layers to accommodation. The two-storey accommodation units allow a greater sense of space by having open plan design. In some, the main bedroom takes the form of an open gallery above the living room with a double-height window giving light to both areas. 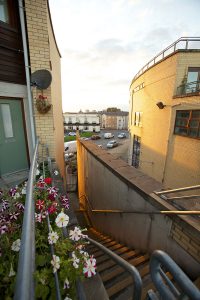 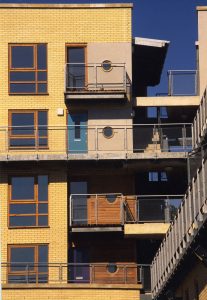 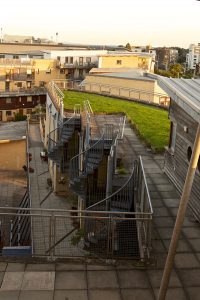 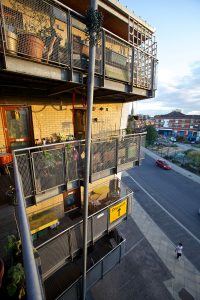 Whereas the original housing estate had solid, concrete, access decks which hid unwelcome visitors, the new access decks are of open, steel construction with wooden floors and are deliberately visible to everyone. However, the emphasis of the design was not only about community living and security, it was also about meeting environmental targets, These included the use of recycled and recyclable materials where possible and having high thermal efficiency and low-maintenance costs for the building.

In order to meet the latter, low-maintenance materials such as western red cedar were used for cladding much of the upper part of the building and for the floors of the private balconies and bridges. Steel was used for the balcony structure, access decks, staircases and railings because steel was more flexible in design than concrete. Any concrete features such as access decks would have to be designed in at the start and could not be changed later. Steelwork, on the other hand, was not installed until a later stage of construction and could be modified beforehand.

“The use of hot dip galvanizing to protect the steel was a logical choice. Any paint, even on top of galvanizing, would need to be maintained at frequent intervals. Galvanizing would not need any maintenance for a long time.”  Neil Lewin, Mills Beaumont Leavey Channon 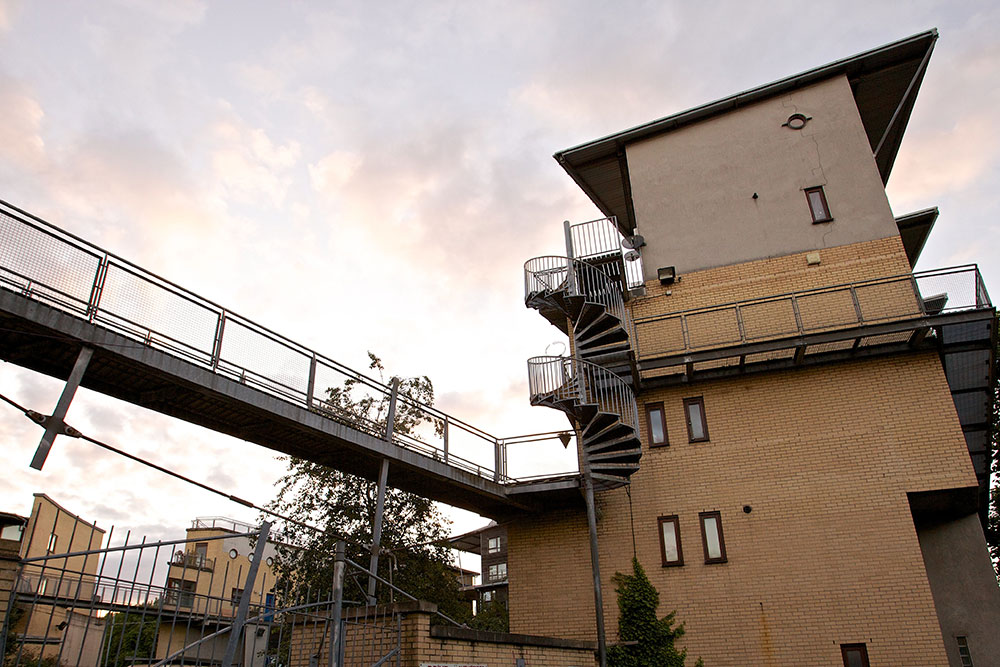 The access decks that join the individual living units take the form of terraces that widen out into three separate turfed roof gardens. The building is reduced in section at each of the terraces so that they are both open to the sky and daylight and are overlooked by upper windows – an important security consideration.

Galvanized steel balconies to the upper floors of some of the apartments form porches to the front doors. Also included in the building are a small cafe and a 130-seat theatre with a gallery for lighting and technics.

Having been so instrumental in every aspect of its design and very being, the inhabitants of the new Hulme Estate will take enormous pride in it. It is they who will manage and maintain it in the future and, in fact, intend to take over the ownership from Guinness Trust in the next three years. It is not surprising, therefore, that hot dip galvanizing has played such a prominent part in this redevelopment.

These modern, lifestyle buildings by Manchester architects Mills Beaumont Leavey Channon were featured in the last edition of Hot Dip Galvanizing (Volume 7 Number 2). They were subsequently entered for the 1997 award for the best use of galvanized steel in architecture (architecture award) and took the top honour.