The Crowned Stag made by Matthew Sanderson is a new dramatic landmark sculpture marking one of the entrances to the new 10 thousand home Beaulieu estate just north of Chelmsford.

Standing 10 m high it can be seen from road and parkland from over a mile away by day or night and is already drawing many visitors since it was unveiled in September 2017.

The sculpture was commissioned by Countryside Zest and their development partner L&Q who appointed nationally re-knowned sculptor Matthew Sanderson to a create an icon that reflected the historic use of the land as a deer park by Henry VIII.

Sanderson took the brief quite literally and reflected a pair of Giant Elk each with 4 m wide antlers held within the branches and roots of a mythical world tree. All of which was mounted upon a reflected pair of four point royal crowns inscribed with a poignant poem also by the artist, which highlights the value of diversity in nature and the responsibility of man. The entire structure, some 7,500 pieces of individually rolled and welded tube was hot dip galvanised to the highest standards and then transported in 55 major sections to be crane erected on site in Chelmsford. This triangular relationship between art, engineering and surface treatment has been critical in delivering apparently delicate structures at architectural scale.

The sculpture took over 2,500 hours to build at the artist’s studios in south Herefordshire and made with 100% renewable energy and from min 95% recycled steel.

Sanderson has designed, made and installed many public and private monuments in Britain and recently started works abroad in Shen-Zhen China. He, his partner and children also run a smallholding and therefore work closely with domesticated and wild animals, local landscape and woodlands, which they have extended in recent years by 3000 saplings. His work, naturally therefore, follows an organic and often elemental theme. 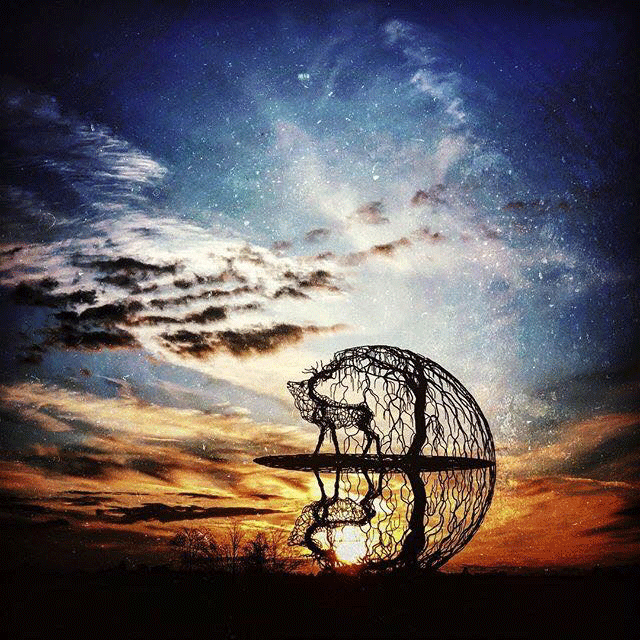