St Michael’s Church has stood on this site in the Royal Burgh of Linlithgow since 1242, it is one of the largest burgh churches in the Church of Scotland.

Through the ages, many of the Scottish kings and Queens have been patrons of St Michael’s and Mary Queen of Scots was baptised here in 1542.

The South Porch Gates were commissioned by The Society of Friends of St Michael’s Church. The Gateway was designed, forged and installed by P. Johnson & Company, artist blacksmiths at Ratho Byres Forge, and dedicated by the former minister in April 2009.

The Gateway, which consisting of two gate leafs and an overthrow, has been hand crafted using traditional blacksmithing skills and techniques. The hot forging of mild steel, punched holes, forged tenons, rivets, fire welding, forged leaves and tapers are all evident of the highly skilled craftsmanship utilised to create the gates.

The design, which consists of intertwining tendrils, leaves & hanging grapes, is representative of the true vine. The Gateway took three blacksmiths, working at the fire and anvil and then riveting the elements of the gates together, three months to complete. Due to Grade A listed building status, permission had to be obtained for the addition of a gate to the building. The gate design was approved but no fixings were allowed into the fabric of the building to hang the gate. The overthrow is ingeniously clamped around the curved pillars, holding it firmly in place. The gates are hinged from the overthrow above and the ground below.

The gates and overthrow were etched using T-Wash, spray painted with two coats of undercoat and then two top coats of Ratho Grey MIO, (micaceous iron oxide paint), a very hard wearing paint which adheres well to the acid etched galvanized finish. Graphite powder was mixed into the paint, which then burnished the surface to give a lustrous finish. 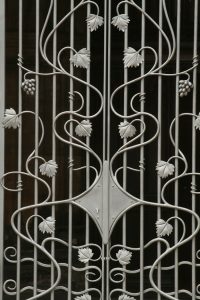 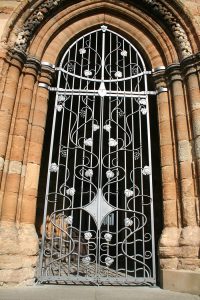 The South Porch Gates look very much a part of this ancient historic building.

The durability of the gates, both in the timeless design and workmanship to create the gates and the use of galvanizing and painting as an appropriate finish ensures that the South Porch Gates will endure as part of the fabric of this historic church for many generations to come.