Agricultural buildings have barely changed since the development of the portal frame over 50 years ago.  Their monolithic structures having striking similarities with warehouses in the urban  environment.

Commercial pressures on farmers necessitate that buildings are densely stocked albeit within welfare guidelines and that genetics, use of pharmaceuticals and feeding regimes encourage rapid growth.  Inevitably these environments can put the animals under considerable stress and they become susceptible to disease and viruses in particular pneumonia.

The design of an agricultural building that provides natural ventilation without significantly increasing the cost of the building has been like looking for the Holy Grail.

The Roundhouse was a eureka moment with the realisation that a round building would naturally aspirate like a chimney.  Round buildings are obviously not new having their origins in the Bronze Age but conventionally constructed they are notoriously expensive. 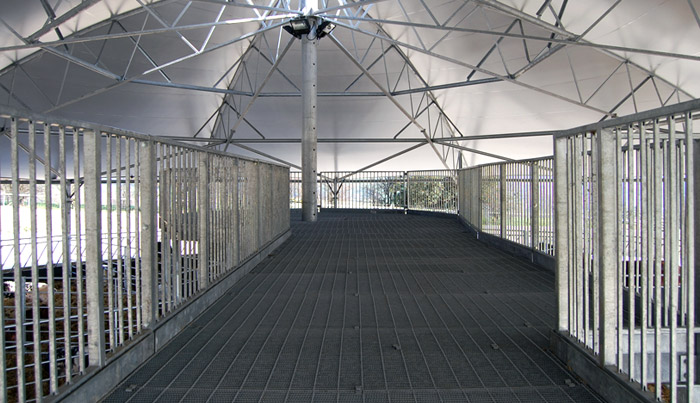 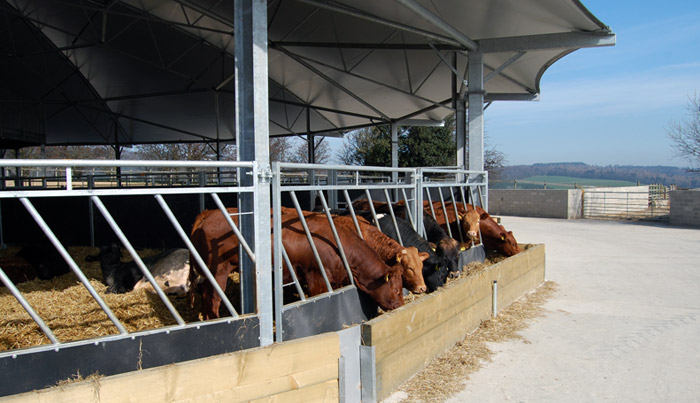 It was felt that a round building could offer other significant benefits for animal welfare, handling and safety.  By including a crowd pen in the centre of the building all pens could funnel to the centre allowing the animals to be moved into the handling area safely and with minimum stress.

Initially the Roundhouse was developed to house finishing cattle.  Being herding animals cattle like to be able to see each other and communicate visually.  Traditional long rectangular buildings with closed sides deny this natural behaviour.  The Roundhouse allows the animals to see one another, they can see outside and establish a natural hierarchy very quickly.  This has meant an unbelievable calm in the building that the designers have never experienced in conventional housing. 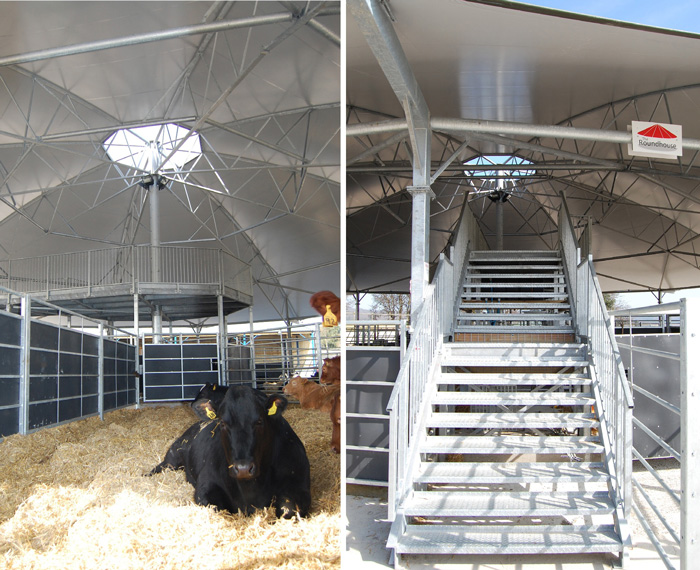 Thus the Roundhouse is a fully integrated design which is very unusual for the agricultural industry.  It has allowed labour savings in the order of 50%, veterinary medication to be reduced by 75%, a 15% saving in bedding and finishing times reduced by up to three weeks.

The Roundhouse has been designed in conjunction with Newcastle University and Arups, using tensile fabric technology for the roof.  More usually associated with architectural feature roofs this technology would have prohibitive costs for one off projects in agriculture.  One of the challenges facing the designers was to find ways of reducing the manufacturing and construction costs in order to compensate for the more expensive roof covering.

By careful engineering the structural steel content was reduced and the building is predominantly constructed from hollow sections steel. Galvanizing was a natural choice for corrosion protection of the steel. It is all roun toughness was also an important characteristic that lends itself to the design principals of the roundhouse. 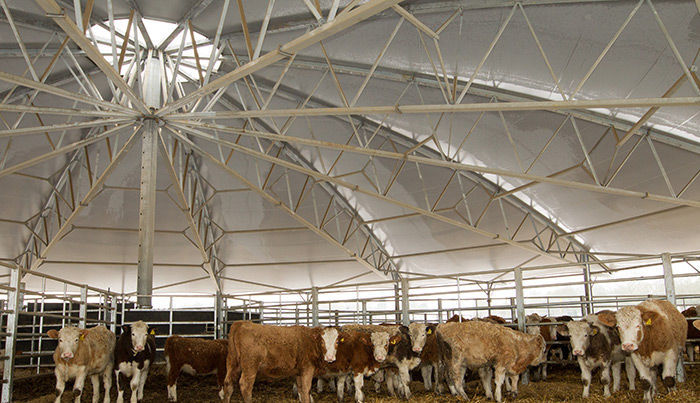 To reduce construction time and more importantly reduce health and safety risks the roof was designed to be assembled on the ground.  Hydraulic rams were developed to climb the central king post and raise the whole roof with stanchions attached whilst eliminating the use of craneage.

In addition, the internal equipment for fencing, feeding and handling is all manufactured from galvanized steel. Water troughs were developed to provide fresher water fed by gravity to reduce the need for the ball valves normally associated with cattle drinkers.  Rainwater is diverted from the roof along the insides of the rafters and columns thus eliminating the need for gutters and downpipes.  This lends the building to the use of rainwater harvesting and several Roundhouses have already incorporated this feature.

To date the Roundhouses constructed are used to house cattle, suckler cows, dry sows, pigs, and buildings shortly to be erected will house deer, sheep, horses and dairy cows.  Currently buildings have been erected from the north of Scotland to the South of England, in Wales and in Southern Ireland.  Interest has been shown throughout Europe, Asia, areas of the Middle East, Canada and America.

Find out more about galvanizing for agricultural buildings