The 2017 GAGAs were marked by a record attendance at 4 Hamilton Place, with its gracious surroundings and chic terrace overlooking Hyde Park Corner. Entrants proved that a simple robust technique which is over 200 years old could still be harnessed to produce visionary architecture and engineering.

Thank you to all our entrants to this year’s Galvanizing Awards. The judging panel consisted of Isabelle Priest, Matthew Wells, Dave McKenna and Iqbal Johal, with the winners announced at the ceremony on 29th June at the Royal Aeronautical Society, 4 Hamilton Place, London.

Charlie Hussey from Sutherland Hussey Harris discussed the importance of GAGAs for small architectural firms in his introductory presentation. 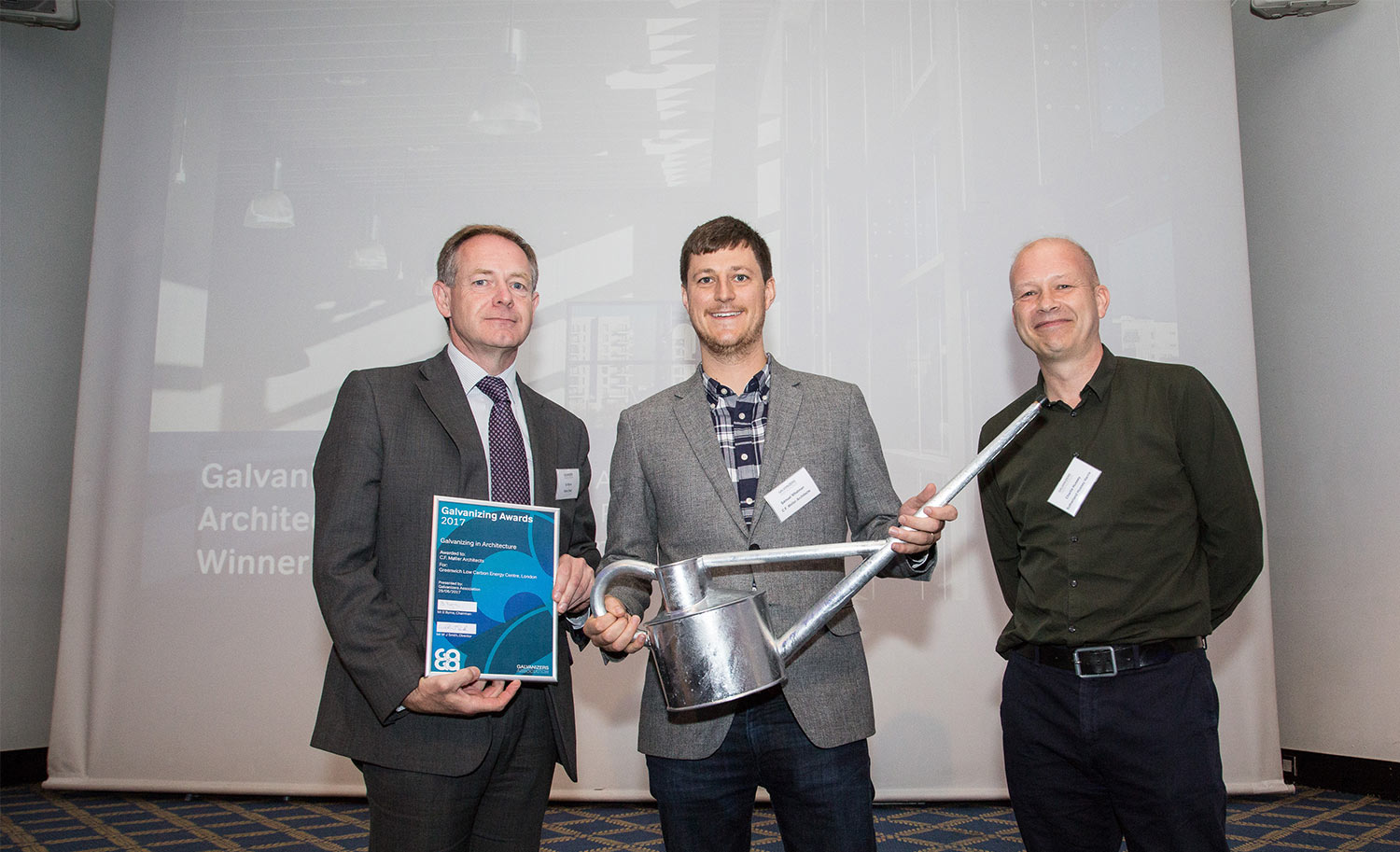 The first prestigious galvanized watering can went to C.F. Møller Architects for Greenwich Peninsula Low Carbon Energy Centre. It forms one of London’s major urban development areas,  including 15,700 new homes, over 300,000 m² of office space and the conversion of the former millennium Dome into an indoor arena.

Hastings Pier Charity won the Engineering Award for the restoration of Hastings Pier, a £14.2 million refurbishment that not only saved the pier, but also secured its future. When construction of Hastings Pier’s rebuild began in late 2013, 90% of the pier’s superstructure was in ruins.  A combined approach was followed: the replacement trusses, cross beams and ties were galvanized. 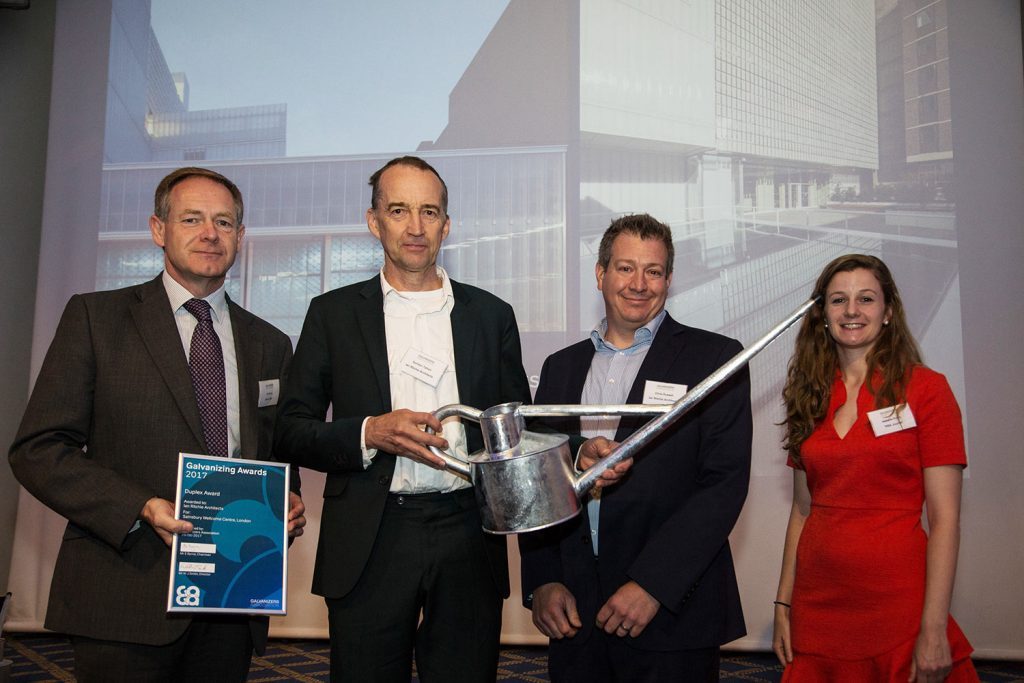 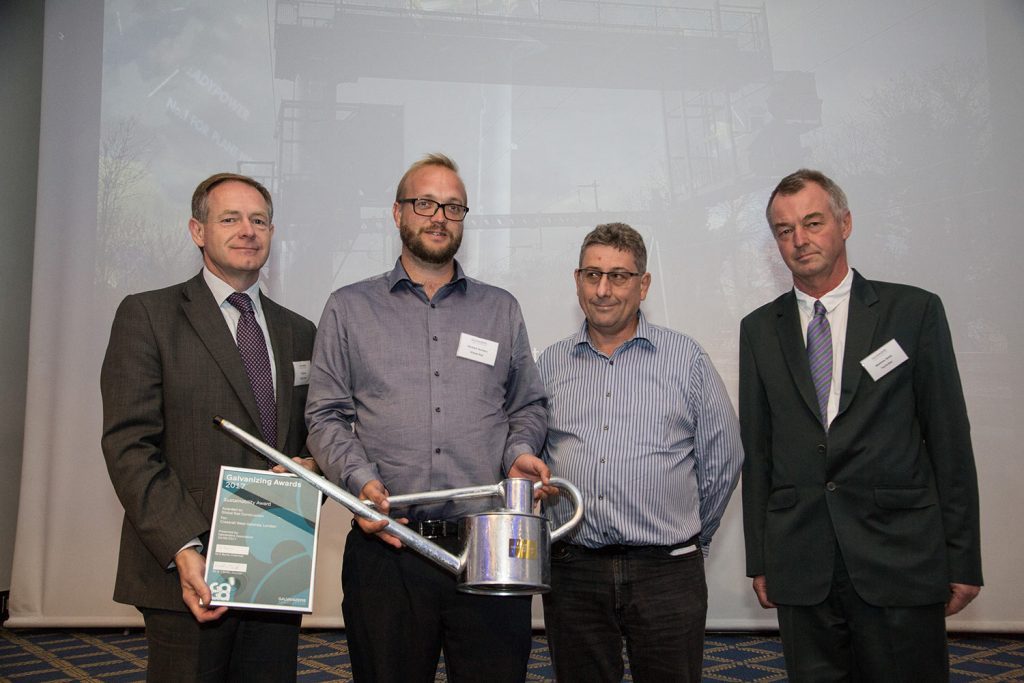 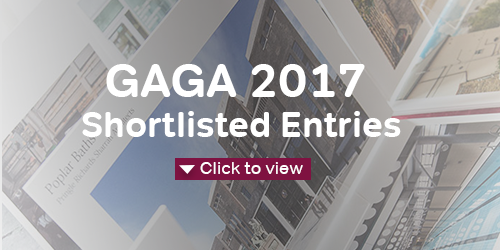 Global Rail’s promotion of reusability in their work for Network Rail was recognised, as one of the many advantages of galvanized helical piles and their associated galvanized steel support grillages. Global Rail used the project to demonstrate significant cost and programme efficiencies with the inclusion of new strategies for end-of-life scenarios.

Ian Ritchie Architects’ Sainsbury Wellcome Centre received the Duplex systems award for being carefully detailed and sitting effortlessly alongside the other varied textures and materials of the huge 13,805 m² building. The challenge for the design team was delivery of a 14,000 m² state-of-the-art, adaptable and collaborative research environment with a minimum life-span of sixty years, capable of attracting the world’s best science research teams. 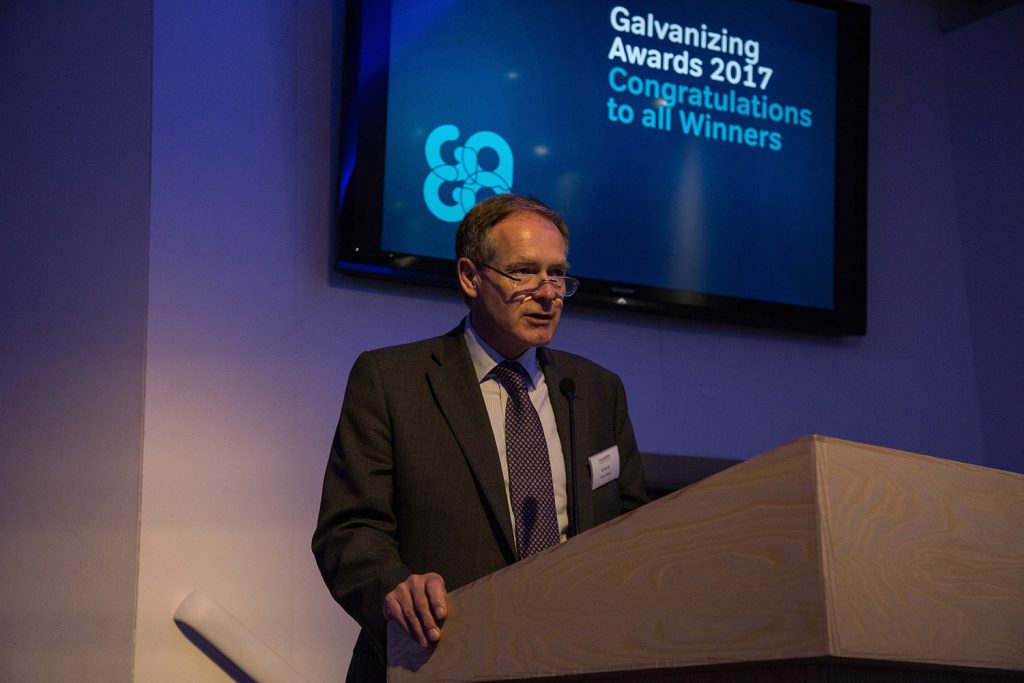 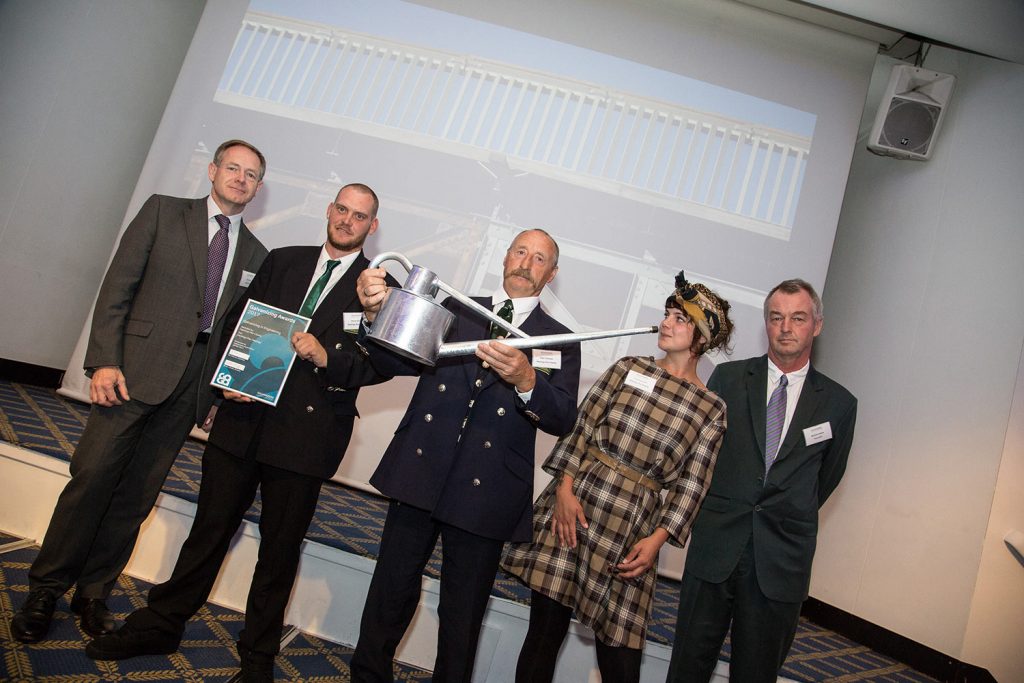 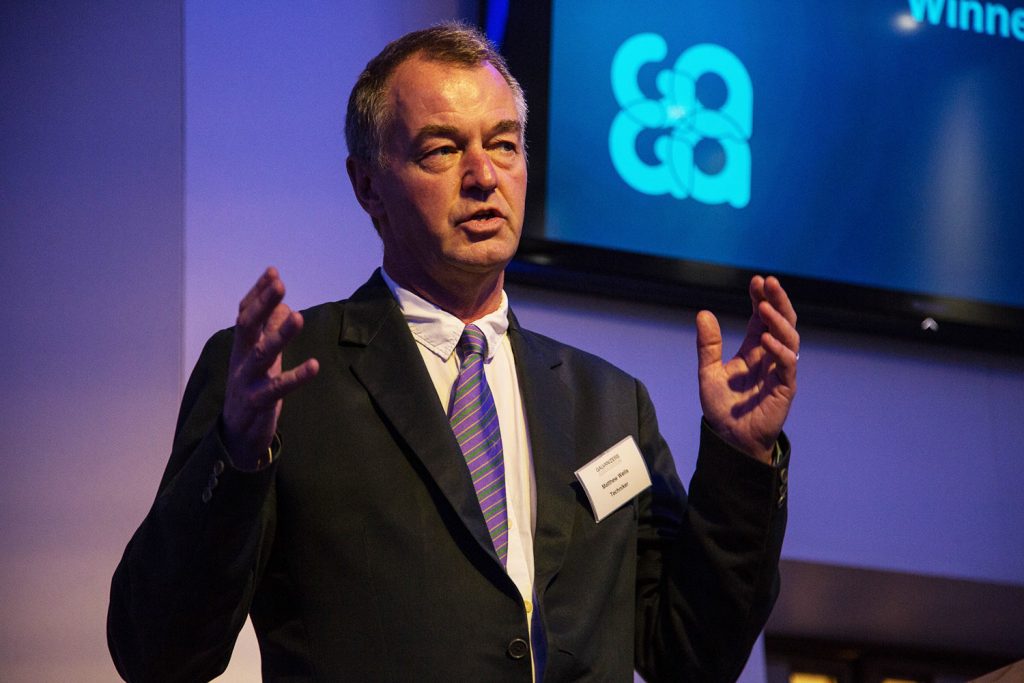 A duplex coating (galvanizing plus paint) appears in two forms, simple painted galvanizing for visual consistency and galvanizing with an intumescent coating for some external steelwork. 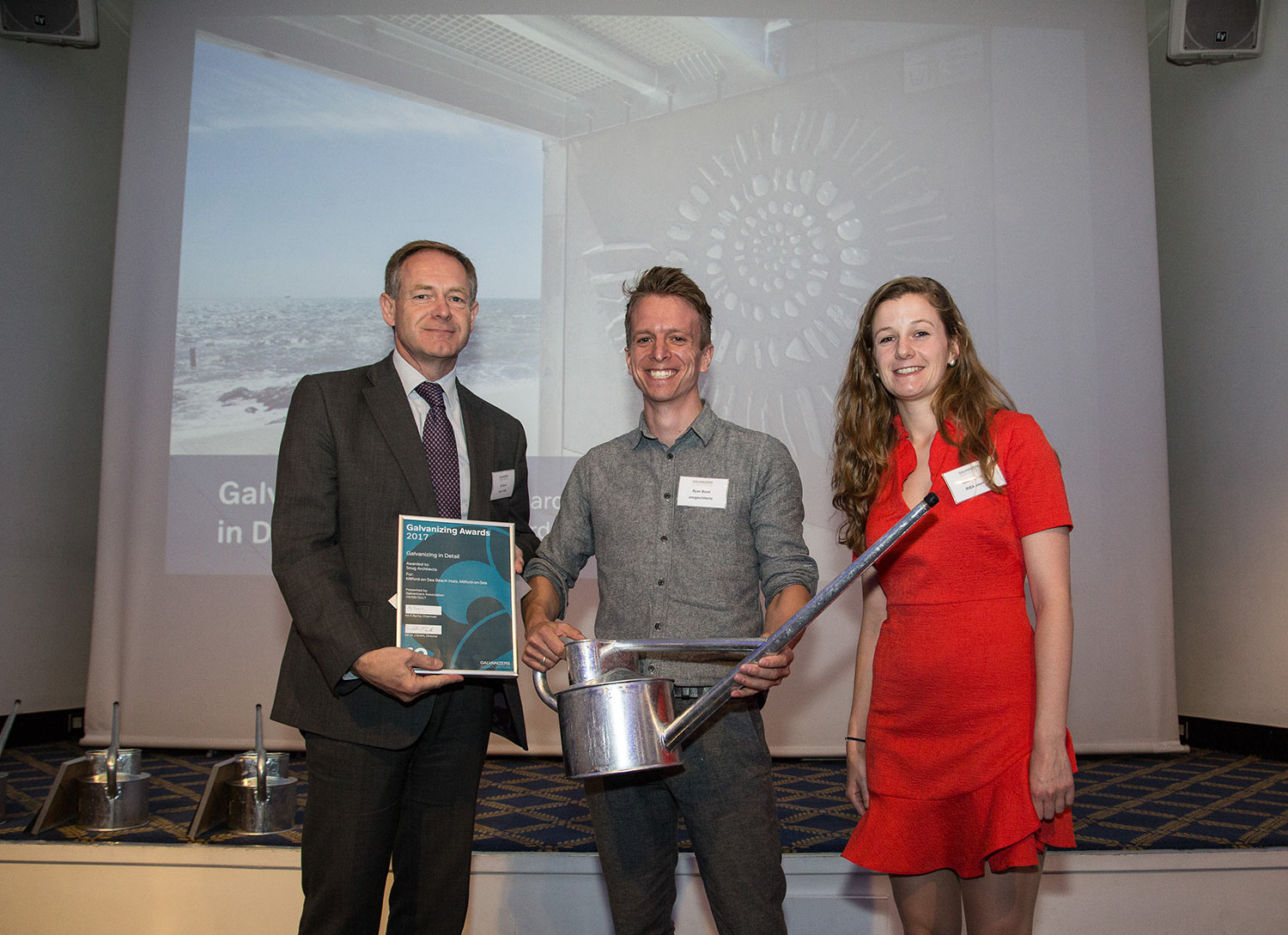 Furthermore, on a smaller scale, the Milford-on-Sea Beach Huts designed by Snug Architects were awarded the Detail Award for drawing on all of galvanized metal’s best properties – tough to the salt of the sea and reflective of the big blue skies.

It was one of the few projects submitted this year to move beyond using galvanized steel as a practical solution to reveal the material’s other, aesthetically pleasing qualities.