Studio Weave have been commissioned to design a pavilion as part of the Churchman Landscape Architects led redevelopment of the Thames Riverside Walk in Nine Elms. Echoing visions of a bygone industrial era at the Thames quays in Nine Elms, the Plateau Garden Pavilion provides a new raised garden at Bourne Valley Wharf.

About The Use of Galvanisation

The structural steel is galvanised, this is however clad in timber and adorned with colourful pattern. The walls at ground level, planter at high level and water tower above are composed of proprietary water tank panels. The panels are pressed steel and as such require sealing and weathering. Although these would be typically over-coated with additional finishes to both sides, we found that galvanisation provided ideal protection to the steel as well as an optimal base for finishing.

The external faces of the panels were coated with a cold applied polymer metal composite finish, consisting of 95% copper and the faces internal to the planter bed and water tower treated with a plant safe epoxy finish. The panel faces internal to the store room were left to expose their galvanised finish and the external copper finished faces left unsealed to allow natural weathering and Verdigris to develop over time.

About The Thames Path Redevelopment

Working in collaboration with Churchman Landscape Architects, the aim of the project was to enhance the Thames Riverside Walk in Nine Elms whilst large-scale building work is carried out locally. 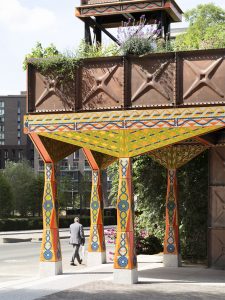 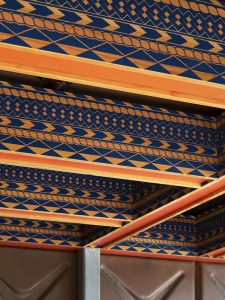 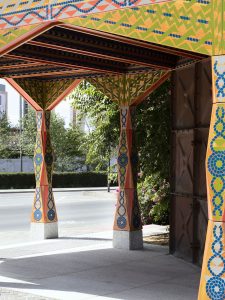 A series of new planters along the Thames Path were the first stage, and a primer project for the pavilion. The planters are constructed from the same proprietary metal panels as the pavilion would later be, usually used to construct water tanks. They have been sprayed with a copper finish, which will acquire a natural green Verdigris over time as they weather and change.

The pavilion provides shelter for the public, as well as for furniture and equipment to be used in Bourne Valley Wharf. As a result the square facilitates activities that complement the ongoing development of Nine Elms. The raised garden allows the pavilion to address the square while providing an additional patch of greenery easily appreciated from the ground level.

Fabricated from copper coated water tank panels, the pavilion cradles a medley of rich foliage that acts as a honey pot for creatures great and small. Hawthorn trees, and a rainbow of grasses and perennials will create a home for wildlife as well as a splash of seasonal colour to the thoroughfare. Habitat is also created by the cladding to the water tower forming House Sparrow terraces. The area is known to host the House Sparrow, ‘Passer Domesticus,’ a species undergoing severe population decline.

Studio Weave invited print artist, Linda Florence, to design and print the colourful pattern adorning the timber. The rope-work and abstract motifs clad the supporting structure and bring vibrancy and colour to the façade and undercarriage.