The residential building, designed and developed by architect Amin Taha accommodates an office for his architectural practice Groupwork + Amin Taha, and apartments, including the architect’s own family home. 15 Clerkenwell Close is located in the central London borough of Islington and draws in the historic nature of its site. 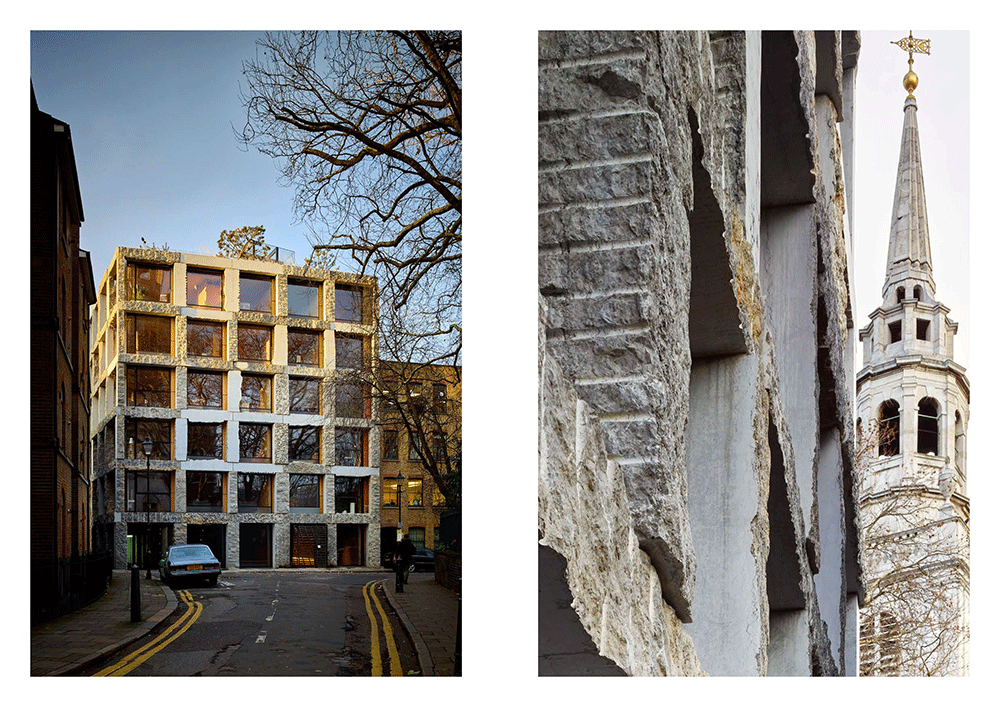 The project brief allowed for the architect to investigate context and a number of possible loose fit solutions for a replacement building that would sit within the all but vanished grounds of an C11th limestone Norman abbey. Originally built by Baron Jordan Briset, it was expanded and remodelled until its C16th dissolution brought religious revolution, precipitating a gradual erosion through subdivision and conversion into grand houses for the newly protestant barons.

The façade is formed from limestone structural columns and beams set back from, but structurally connected by painted galvanized steel sections to the building envelope with a variety of finishes: smooth, rough, drilled and straight from the quarry. The retention of these natural finishes is highly unusual today as the link between architects and quarries has also been lost, with prepared small sample tiles often being the only connection and understanding of the material. The decision to allow the fossils and the quarry master’s sub-division of the stone bed to speak was intentionally part of the broader philosophy of material, structure, working and design skills acting in unity to make architecture.

The natural quality of the façade has been reflected within the interior material choice. Bespoke galvanized window frames were used throughout the project which were treated to achieve a weathered bronze effect.

15 Clerkenwell Close reminds us that the literacy of the built and broader environment is based on understanding and disseminating through construction; the poetic possibilities inherent within the structural and aesthetic qualities of all materials available that make up the vocabulary of all architectural languages.

Posted on June 19, 2019 by Galvanizers Association

A galvanized net envelops the new headquarters building for the renowned taz newspaper, Die Tageszeitung, in Berlin’s new media quarters next to Bessel Park. The false façade forms an additional space that blurs the boundaries between the interior and exterior,…

Merck is one of the oldest pharmaceutical companies in the world. It’s headquarters in Darmstadt has been progressively remodelled from a production works into a technology and science campus. At the heart of this transformation is the Innovation Centre. The…