Constructed within an ancient woodland to celebrate the work of an aviation pioneer, The Blackburn Wing is an innovative conference centre.

The brief was to create an aviation inspired design that celebrated the achievements of the largely forgotten aviation pioneer and former owner of Bowcliffe Hall, Robert Blackburn, who designed and produced ‘The Mercury’, a single-engine, two-seat mid-wing monoplane. Constructing such a building in a densely wooded area, on a severely sloping site, with a tree root protection zone to the entire footprint required innovative architecture and engineering.

The Harris Partnership and Curtins worked closely to produce a final design which offered the iconic building requested. The glulam timber rib form is symbolic of a wing construction and creates the building form through repetition, similar to the formation of the first Blackburn wing.

The wing is constructed in the grounds of The Bowcliffe Hall estate, within a clearing in the 38 acres of woodland. The wood dates back to before 1600, and thus is designated “ancient woodland”. Blackburn Wing is thought to be one of only two structures ever to have been constructed on land designated as such and presented some unique challenges to the design and construction team. 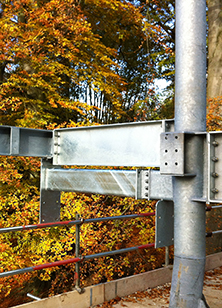 Due to the extensive root protection zone, a Planning Condition was imposed, which allowed for no excavation to be undertaken on the site and no heavy construction plant to be used. This provided a significant structural engineering challenge both with regards to designing foundations, but also as to how the building would be constructed. The final design uses a driven pile foundation solution, utilising a tracked piling rig not exceeding 1 tonne in weight. To ensure that no excavation was to be undertaken, the piles were designed to cantilever above ground with the in-situ concrete pile cap cast above ground and exposed in the final finished scheme.

Planning restrictions also dictated that the main structure of the Blackburn Wing must be lightweight, both due to the complicated foundation solution and due to the restrictions in construction plant. Steel for the main structural frame was the obvious solution, due to its lightweight and ability to be pre-manufactured off site and craned into position with minimal impact on the existing environment.

The severe slope of the site, with a level difference of over 7.5 m along the length of The Blackburn Wing, presented some substantial structural challenges, as the building was to be designed to be accessible to all with not only level access into the building, but also providing level access from the pedestrian path which was 1.5 m higher. A steel framed podium structure forms the ground floor with two steel framed bridges linking the pedestrian path to the podium. Below the podium level, slender raking steel columns with a network of fine tension wires provide stability to the structure.

At the tip of the curved wing profile, the bending radius was too tight to form as one section of glulam beam and therefore a pin jointed turnbuckle was designed. It was exposed in areas to express the structure and needed to be aesthetically pleasing, but also had to have the same robust finish as the rest of the structure.

With much of the structure on The Blackburn Wing being exposed and expressed in the design concept of the building, it was important to specify a steelwork protection system which achieved the architectural intent whilst still providing a robust level of protection.

Curtins and The Harris Partnership agreed that galvanizing the steel would provide the required aesthetic, whilst offering the best overall protection to the iconic structure not least due to its long maintenance free life but also no time would be lost on-site in surface preparation, curing or inspection.

The new centre for data processing in Karlsruhe is key to the smooth functioning of 65 tax offices across southwest Germany. The addition of a new administration centre is part of a phased programme of construction works to update and…

The striking new courthouse in the town of Almendralejo, Western Spain, is juxtaposed within its triangular footprint and its more traditional surroundings. The geometry of the plot and its proximity to an adjoining residential area determined the organisation of the…

Galvanizers Association has been recognising the innovative use of galvanized steel by architects, engineers and constructors for over 20 years with its Galvanizing Awards competition. In order to appreciate all aspects of galvanized steel, the awards will be presented in…

The construction of the Vitra Slide Tower is the newest addition to the thirty year old Vitra Campus. The production premises include buildings by famous architects; Frank Gehry, Tadao Ando,Herzog & de Meuron and Zaha Hadid. The new structure includes…