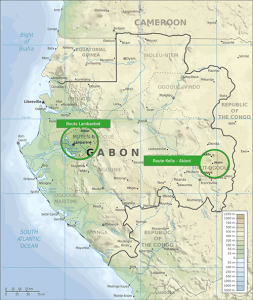 A journey through Gabon will take in a vast country criss-crossed by rivers, forests and an abundance of wildlife. What quickly becomes apparent is the lack of connection across key routes through the country. A new government backed investment programme is trying to address these issues with the help of Acciona, an infrastructure company based in Spain.

Acciona were set the task of working on two routes on the western and eastern fringes of the country; Lambarene, where 42 bridges needed to be replaced and Kelle – Akieni which involved 38 bridges.

Acciona’s engineering team decided to tackle the numerous problems they faced by adapting a modular concept for the bridges. This would enable the design to be adapted to local on-site conditions of varying spans, loading and erection methods. A substantive remit of the client was that of the requirement to have the bridges designed with a maintenance free service life. 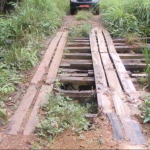 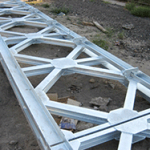 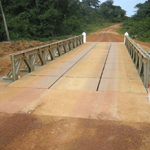 Steel become the material of choice for its strength to weight properties, and hot dip galvanizing as the protective coating that would be necessary to provide the required protection in what would be a tropical, humid environment. During the manufacturing phase, fabrication was carried out to tight tolerances with the added focus of enabling interchangeability of some sections. Given the importance of corrosion protection, steel containing optimum levels of silicon and phosphorus was specified to obtain a thicker galvanized coating.

The project has not only improved the daily lives of villagers but brought whole communities together, part of which involved the training of local labourers to erect and perform load tests on the the bridges.

Posted on August 4, 2017 by Galvanizers Association