The Greenwich Peninsula is one of London’s major urban development areas, including 15,700 new homes, over 300,000 m² of office space and the conversion of the former Millennium Dome into the indoor arena renamed The O2. 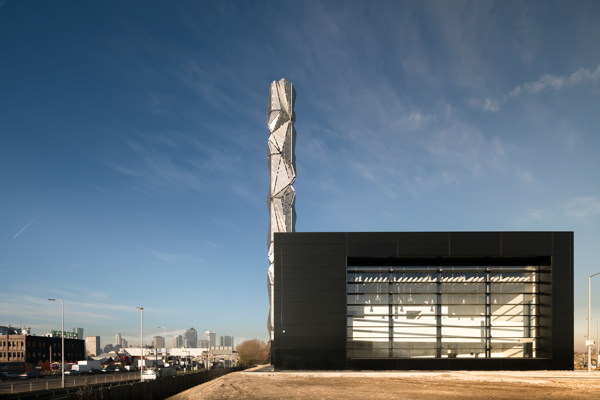 Responding to a cross-party drive to increase the use of Combined Heat and Power (CHP) across the UK and to realise a vision of decentralized energy power generation in London, the Greenwich Peninsula Low Carbon Energy Centre houses technically advanced boilers and CHP that provide heat energy to businesses and homes due to be built on the Peninsula. It also forms part of the Peninsula’s Sustainability Strategy.

The Energy Centre is the largest new build residential heat network in Europe, saving over 20,000 tonnes of carbon every year. The 3,000 m² centre, situated in a prominent location adjacent to the Blackwall Tunnel Approach, is a highly visible and important new landmark. Heat energy will be distributed via a District Heating Network (DHN) from the Energy Centre to each plot across the development. 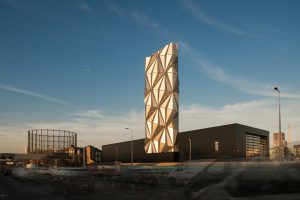 Designed by British artist Conrad Shawcross, a 49 m high stack tower unites sophisticated engineering and complex optic research to create an impressive sculptural concept on a huge scale. The cladding for the structure is formed of hundreds of triangular panels that fold and flow across the surface of the tower forming complex geometric patterns that visually break up the flat planes to create an uneven, sculpted surface that plays with the vanishing points and perspective. 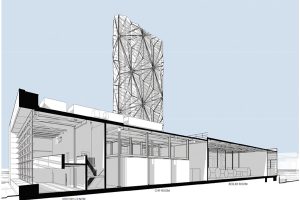 The structure is 20 m wide and 3 m deep and is constructed from five interconnected galvanized steel ladder frames that are clad with perforated aluminium panels, each the size of a London bus. These triangular panels fold across the surface of the tower forming intricate geometric patterns that create a dynamic, sculpted surface.

To demystify the process of energy generation, the Energy Centre’s machine room and flexible ancillary office accommodation is supplemented with a Visitor Centre offering an interactive educational experience.

Posted on December 22, 2017 by Galvanizers Association