A building which houses a 231 room Ibis hotel and retail space, is nothing new unless it also serves as a multi-storey cycle park which is ten times larger than any other cycle park facility in the UK. As an exemplar building CB1 sets a precedent for other towns and cities aiming to encourage cycle use as part of their strategic plans to improve the urban environment and transport facilities in general.

The building forms the northern enclosure of the new Station Square in Cambridge and is part of the gradual realisation of the CB1 Rogers Stirk Harbour designed masterplan for Brookgate which will transform the station area of Cambridge. 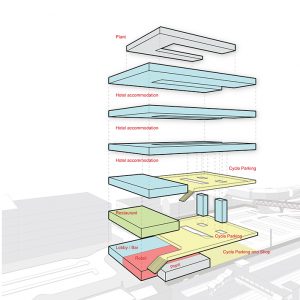 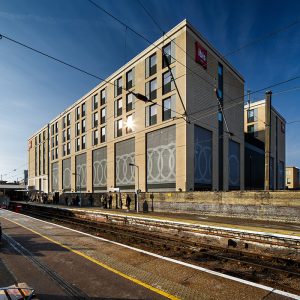 CB1 is located in a prime position for the city’s transport links – directly in front of Cambridge Station and the new transport hub. The railway station, bus interchange (including the Cambridgeshire Guided Busway), taxi rank and cycleways provide commuters with plenty of options for reaching their destinations quickly and comfortably.

Formation Architects’ challenge was to integrate the cycle park, hotel and retail space into a coherent, singular building, which addressed the new Station Square and responded sensitively to the neighbouring listed station building.

The height and footprint of the new building were determined by the parameter plans of the consented CB1 masterplan. Cyclists enter the building from the quieter Northern Access Road to park their bicycles on one of three floors accessed by a large ramp. Secure, lit, covered storage is provided for 2,850 bicycles on conventional and double-stacker stands. A cycle hire and repair shop is located on the ground floor, providing maintenance, cycle hire, cycle accessories and cycle sales, making the facility a true cycle hub and strengthening further the sustainable transport options in a city where there is already a high propensity to cycle. Above the cycle park are the hotel bedrooms in a U-shaped plan forming an internal courtyard on the second to fifth floor. Cyclists can exit and enter the building via a wide staircase onto Station Square. 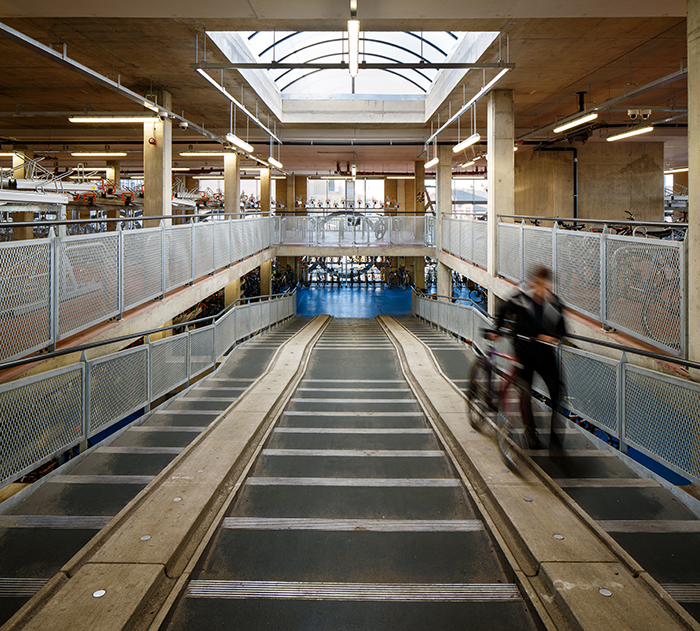 Galvanized steel is incorporated throughout the cycle park providing an important ancillary role. Long term, resilient protection is afforded to the network of bike support steelwork and perforated panels and handrails running along the ramps and around the three storey structure.

The main façade addresses the station square. The corners are recessed to create a well-proportioned central section and a subtle transition of scale to the northern wing of the existing listed station. Stone at ground and first floor gives the building a solid base and defines the vertical hierarchy. Green coloured panels by the side of the windows emphasise the vertical proportions and complement the gault brick of the listed station building.

The cycle park is outwardly expressed on the building façade by double storey perforated metal panels on the first and second floors, set between brick pillars which also serve to define the regular spacing of the hotel rooms above. These panels provide wind and rain protection for the cycle park and reflect the use of the space through an abstracted cycle related motif applied onto them.

Open seven days a week, the CyclePoint is brightly-lit and, in another helpful touch, has parking areas identified with a different colour scheme on each floor and individually numbered stands to enable customers to easily identify cycles on their return.

The new complex offers safe and secure spaces, in a dedicated facility, covered by CCTV, open 24 hours a day, free of charge. It has more than tripled the cycle parking capacity at the station and provides an optimistic outlook of things to come.

Posted on April 5, 2018 by Galvanizers Association

Supported by backing from government, a quiet revolution has seen an increase in cycling across the UK and Ireland. Although the uptake is higher in certain concentrated areas of the South East, almost all major railway stations have reasonable bike…

The city of Mainz has in recent years developed a trend towards being a more bike friendly city. In terms of private bike parking however there continues to be a shortage of suitable parking spaces. Against this backdrop, SYRA_SCHOYERER ARCHITEKTEN…

The University of East Anglia has unveiled its new bus shelter as part of a joint initiative by Norfolk County Council and UEA to improve the image and efficiency of public transport on campus. The striking design aims to create…

Leeds Station is the second busiest railway station outside London and sits at the heart of the region’s economy. More than 100,000 passengers use it each day. Increasing passenger demand, congestion to the existing northern entrance and an aspiration to…