A galvanized net envelops the new headquarters building for the renowned taz newspaper, Die Tageszeitung, in Berlin’s new media quarters next to Bessel Park. The false façade forms an additional space that blurs the boundaries between the interior and exterior, offering new visual perspectives for employees. 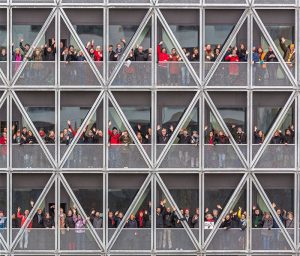 After 25 years at the Rudi-Dutschke-Strasse across from Checkpoint Charlie, the Berlin daily newspaper launched an architectural competition to bring its sprawling Berlin offices under one roof. E2A won the competition to develop the new site at Friedrichstrasse 20-22. Concrete, glass and hot dip galvanized steel are the dominant materials of the building that help to create the desired space and atmosphere.

A net-like concrete structure forms the framework of the building envelope, requiring no internal support. The 13 m, free-spanning office floors provide for the creation of flexible work spaces and a lack of hierarchy that symbolises taz’s working ethic. The structural system attempts to reach the greatest possible load capacity with the fewest possible elements.

The diagonal pattern of the concrete support structure is duplicated externally to form a galvanized steel façade that hangs off the building. This ‘crochet blanket’ was inspired by staff and enables the building to expand into the city scape while providing a wraparound balcony that allows employees to enjoy the additional external space. 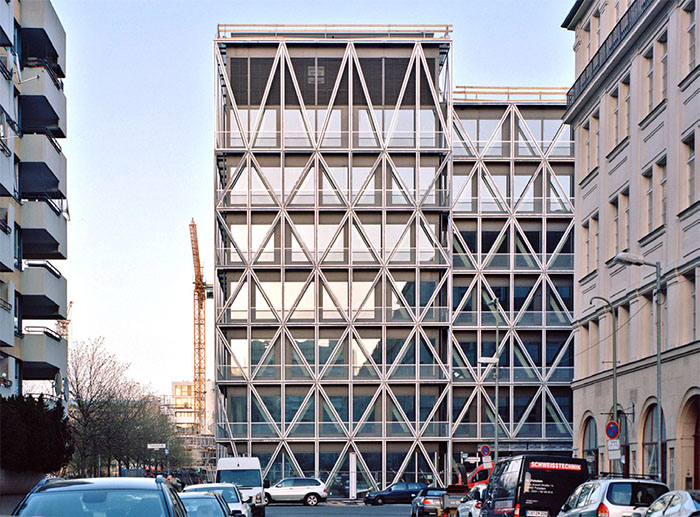 A central set of galvanized steel staircases that zig zag up the side elevation of the building act as one of the main access points throughout the building while also offering access to the external balconies and encourage spontaneous communication.

The shimmering new galvanized skin for the taz building sits quite comfortably within its surroundings providing an unpretentious and robust materiality to its external envelope that will slowly patinate over time.

Posted on June 17, 2019 by Galvanizers Association

Using self-finished structural materials, carved and fallen columns, revealed cloisters and mosaic floors, 15 Clerkenwell Close, alludes to a local physical and social archaeology but also raises questions on architectural heritage and its integration within a broader culture. The residential…

Merck is one of the oldest pharmaceutical companies in the world. It’s headquarters in Darmstadt has been progressively remodelled from a production works into a technology and science campus. At the heart of this transformation is the Innovation Centre. The…