Cell division (mitosis) as the origin of life is the design concept for the new visitor centre for the dinosaur park in Kleinwelka. The process of mitosis serves as a model for the filigree building design and shape. The widely visible Mitoseum, through its height and volume, sets the scene for visitors to the theme park. 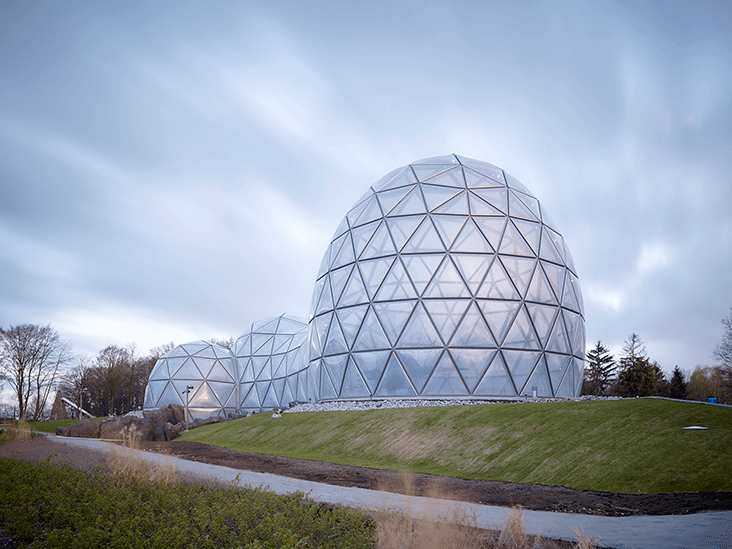 The entrance level of the building, with bistro, shop and lecture room is spanned by three domes. These are lightweight steel structures and symbolize the ‘cells‘ of mitosis. The transparent outer skin floods the interior with daylight. After reversing the light conditions at dusk, the cell membranes become bright landmarks. The domes have a maximum height of 22 m, cover a floor area of 1,238 m² and a volume of 11,400 m³.

The envelope surface of the domes consists of 466 ETFE foil cushions, which are inserted into a framework of galvanized steel rods. 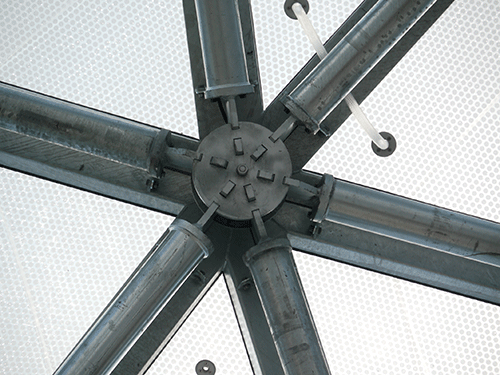 A plug-in knot was developed, which accepted all angles and radii and which could be produced to allow for a degree of tolerance and assembled on site 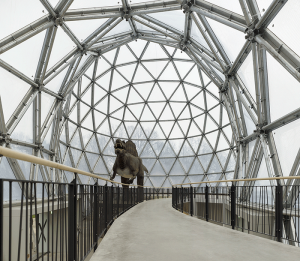 The interplay between the floor plan and the envelope construction formed a special challenge: resolving the complex three-dimensional geometry of the construction elements as well as their structural load bearing capabilities.

This was of particular importance in trying to deal with the connection detailing which would have to handle the intersection of a variety of rod angles. A plug-in knot was developed, which accepted all angles and radii; which could be produced to allow for a degree of tolerance and also could be assembled on site.

How to protect a dome structure from corrosion

Large differences in temperature and the non-thermally separated fasteners would entail condensation. This meant that the entire steel structure needed protection. All steelwork was galvanized as a result. The natural galvanized finish and its patina fits in well with the symbolic theme of the building.

Posted on April 12, 2018 by Galvanizers Association

A Hall for Hull

UK City of Culture is a designation bestowed upon a UK city on a four year cycle, it was hoped that the initiative would mimic the success achieved by Liverpool’s year as European Capital of Culture in 2008. Started in…

In 2003 Dublin City Council launched a design competition to secure a joint venture partnership that would build social and affordable housing on a 4 hectare council owned site to the west of the city. The brief required the design…

Galvanizers Association has been recognising the innovative use of galvanized steel by architects, engineers and constructors for over 20 years with its Galvanizing Awards competition. Entering is free, quick and easy, offering you the opportunity to win a unique hand…

Built in the mid-1950s, the main staircase of the hospital in Preetz, Germany recently undertook a redesign forming part of a wider modernisation. Designed by Isabel Lange, the existing handrailing is wrapped with a hot dip galvanized relief. It was…