Now over twenty years old, the Ellis-Miller House was designed by Jonathan Ellis-Miller while working for the eminent modernist architect John Winter. Winter had built two houses for himself including 81 Swains Lane, London in 1969, which is now grade 2 listed and is currently being restored by Ellis-Miller. Winter thought it was essential that architects built and lived in their own houses and therefore encouraged Jonathan to undertake his own self-build project. A site in the unprepossessing Cambridgeshire fenland village of Prickwillow was purchased because it presented no significant planning challenges and a clean slate to build a house with the daunting challenge of a £40,000 budget and a developing architect’s own limited technical ability. 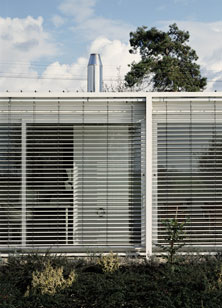 Ellis-Miller wanted to explore a modern house design that used techniques of off-site and modular construction, without having to resort to traditional craft skills. The house was to be small with only 66m² and the form was a simple box: it was to enclose the maximum volume using the minimum amount of material. Ground conditions in the Cambridgeshire Fens are treacherous and thus a lightweight form of construction would ensure that a reinforced concrete raft foundation could be used as opposed to using expensive piling.

The need for the house to be lightweight meant that a steel framed design was chosen comprising of a very simple galvanized hot-rolled post and beam steel frame, with a trapezoidal galvanized steel structural roof that would double up as a ceiling finish. Ellis-Miller was keen to use steel wherever possible and rather than using timber studs for non-load bearing walls galvanized steel studs break-pressed from 0.6mm sheet were used. The roof finish was based on a galvanized standing seam system. In fact galvanized steel was used in every major element of the house. 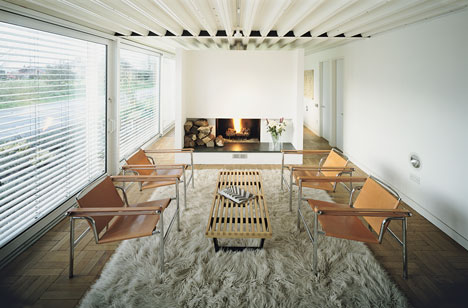 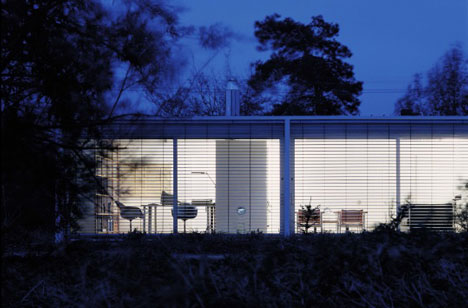 Environmental issues were also an important design element of the house. The roof was highly insulated using over 300mm of rockwool and the floor and walls were insulated to a much higher standard than was the norm in 1991. Underfloor heating was incorporated and solar gain on the fully glazed western elevation was controlled by the introduction of electrically operated external aluminum venetian blinds. These blinds controlled solar gain and acted as external curtains. To contrast the self-finished materials used for the structure and cladding of the house, internally more colour and contrast were added by the use of reclaimed parquet oak flooring throughout.

The house, once completed, was well-received by the trade and national press and was given many awards, the most recent being the Twentieth Century Society best 100 building of the 20th Century.

To date, the house remains in excellent condition and the steelwork is pristine, a tribute to the initial investment in high-quality corrosion protection.

Rubbing shoulders with its famous Bauhaus neighbours, B10 makes its own innovative statement. Many aspects of the interactive house look like something from a James Bond film with its self-learning energy management system and automated facade sections. B10 generates twice…

This innovative design for The Kiosk came about as part of a change of use application for the neighbouring retail unit, which had previously been used as a florist. The concept for the rippling CNC-cut timber layers of the facade…

The Social Care and Health Centre in the city of Móstoles (Southern Madrid) has been designed with two crucial design considerations: the creation of a multipurpose space on a very tight budget. Located in an area of urban expansion, its…

Located on thirty acres of remote pasture, Lavaflow 5 attempts to frame the sea and sky with a minimal structure. The slender galvanized steel frame supports walls of varying opacity; from nothing, to glass, to screen, to solid – creating…