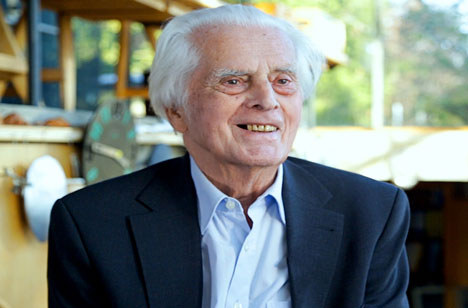 In stating their reasons for giving him the award, the Jury declared that Otto was not just an architect, but also “an explorer, an inventor, a pattern-finder, an engineer, an environmental activist, and the creator of some unforgettable buildings and projects”. Otto’s own comment about himself, “I’ve not built much. But I did dream up lots of ‘castles in the air’”. He was one of the most important architects and architectural theorists of the twentieth century. His greatest claim to fame was that he brought lightness into architecture. Roof structures, such as the star wave tent at the Tanzbrunnen Park in Cologne, which dates from 1957, the cable net roofs for the Olympic site in Munich, or the aviary of the Hellabrun zoo, are already part of architectural history. The Institute for Light Plane Load-Bearing Structures which he founded in 1964 at the University of Stuttgart, and which now carries on his work under the direction of Werner Sobek, is famous all over the world.

Frei Otto was one of the initial thinkers behind sustainable construction and also used hot dip galvanized steel in his building projects to good effect. These include the house in Warmbronn where he lived, the aviary of the Hellabrunn zoo, which dates from 1980, or the very recently erected group of bridges in Mechtenberg and Schwarzbach in the Ruhr.

Frei Otto is the first Pritzker Prize winner who will not accept the award in person, as the prize is awarded to architects who are still alive. Otto learned that he had been honoured with the prize before he died, and said “I never did anything to earn this prize. Winning prizes is not my life’s ambition. I am trying to help poor people. But what can I say? I’m very happy.” 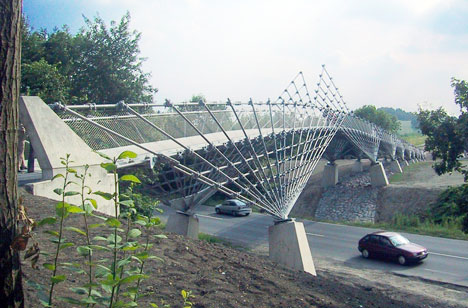 Casehistory: The Aviary at Hellabrunn Zoo

The Aviary at Hellabrunn Zoo was completed in 1980 covering an area of 5000m². The project was a collaboration between Frei Otto with Jörg Gribl and Ted Happold. A recent inspection carried out by the Institute Feuerverzinken in July 2015, found the galvanized pylons to be in excellent condition after 35 years’ service. With recorded coating thicknesses of 220 microns, the galvanized coating will continue to provide protection for many decades to come.

RIVA 1, a new office and private apartment complex at Phoenix lake in Dortmund offers luxurious living along a lakeside setting. Architects Schamp and Schmaloer have created simple, elegant cubic forms to characterise what will be an expanding district. Artist…