A Touch of Galvanizing

A Hall for Hull

UK City of Culture is a designation bestowed upon a UK city on a four year cycle, it was hoped that the initiative would mimic the success achieved by Liverpool’s year as European Capital of Culture in 2008. Started in 2013 with Derry-Londonderry, Hull received the accolade for 2017.

During its last period of city of culture, Hull has seen the installation of a new ‘room’ for the city created by sixteen galvanized steel columns. A Hall for Hull – a joint commission by the RIBA and Hull UK City of Culture 2017 – was unveiled to the public.

The project, supported by the British Council, was developed through an invited competition for an architectural and artistic collaboration, with a brief to create a temporary intervention designed specifically for Trinity Square.

The monumental temporary installation has transformed the square with sixteen galvanized steel columns arranged in a grid formation in front of Hull Minster to form a new outdoor ‘room’ for the city. Designed by Chile-based architects Pezo von Ellrichshausen and Swiss artist Felice Varini, visitors to the installation will be able to inhabit each of the 6 m high columns and experience varying light conditions created by perforations in the steel skin.

The rigid geometry of the columns will be carefully distorted and redefined by the artwork of Varini, through illusions of geometry, photographic techniques, alongside traditional pictorial representation.

“A Hall for Hull effortlessly fulfills the commission’s aim to push the boundaries of how we observe art, architecture and public spaces and to facilitate unique experiences for residents and newcomers to the city.“ 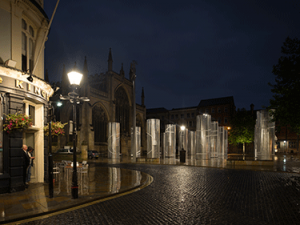 Marie Bak Mortensen, RIBA Head of Exhibitions, said:
“Pezo von Ellrichshausen and Felice Varini have developed an exceptional proposal; one where Varini’s abstracted art applied to architectural space aligns with Pezo von Ellrichshausen’s practice of monumental architecture – carefully considered to the scale of Hull Minster and its surrounding square. Visual and physical contradictions merge as visitors to Trinity Square will be met by imposing, static steel columns that are open to the sky and whose perforations create a feeling of lightness.

Adding Varini’s illusionist artwork that beguiles the viewer, A Hall for Hull effortlessly fulfills the commission’s aim to push the boundaries of how we observe art, architecture and public spaces and to facilitate unique experiences for residents and newcomers to the city. I look forward to seeing this installation unfold in-situ as RIBA takes its programme outside its dedicated gallery spaces in London and Liverpool.”

Galvanizing brings a tactility that the artist wanted, the important aspect of encouraging the public to explore, touch and inhabit the installation were crucial to its success.

A set of perforations across the galvanized columns create varying degrees of interplay with light and shadow details that are reflected into the interior space. These effects are intriguingly compounded by the artwork applied by Varini. The rigid geometry of the installation is playfully distorted by hand-drawn artworks across the columns acting to confuse and delight passersby, while challenging perceptions of perspective and scale within the backdrop of the minister.

The objective of the project succeeds in peaking the interest of visitors, offering at first a different vantage point to absorb the grandeur of the minister and also to digest the impact of the new space created by the installation. A Hall for Hull will be used by the church to host performances, but the hall is designed with the hope that residents and community groups will activate the space for multiple purposes beyond the imagination of the artists. 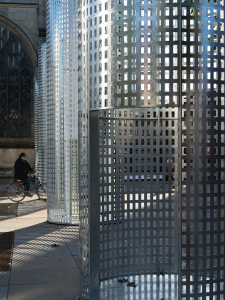 The use of galvanized steel was incorporated as an important part of the project at its conception. It was seen as a way of interlinking many strands that would bring together the heritage of Hull but also its new modernity.

Galvanizing would bring a tactility that the artist wanted, the important aspect of encouraging the public to explore, touch and inhabit the installation were crucial to its success. The fact that the steel could be galvanized locally was also an important part of the initial decision to use galvanizing.

Posted on February 11, 2018 by Galvanizers Association

In 2003 Dublin City Council launched a design competition to secure a joint venture partnership that would build social and affordable housing on a 4 hectare council owned site to the west of the city. The brief required the design…

Cell division (mitosis) as the origin of life is the design concept for the new visitor centre for the dinosaur park in Kleinwelka. The process of mitosis serves as a model for the filigree building design and shape. The widely…

Galvanizers Association has been recognising the innovative use of galvanized steel by architects, engineers and constructors for over 20 years with its Galvanizing Awards competition. Entering is free, quick and easy, offering you the opportunity to win a unique hand…

Built in the mid-1950s, the main staircase of the hospital in Preetz, Germany recently undertook a redesign forming part of a wider modernisation. Designed by Isabel Lange, the existing handrailing is wrapped with a hot dip galvanized relief. It was…