Garsington Opera, founded in 1989 by Leonard and Rosalind Ingrams, stages summer festivals. It forms part of the ‘summer season’ activities that are peculiarly English. The venue hosted outdoor performances of both popular and experimental opera, and is obviously accompanied by picnic and tea tents. “It had been described as a lean-to on the patio in their garden,” says Snell Associates’ director Robin Snell. When Leonard Ingrams died in 2005, Anthony Whitworth-Jones became general director of Garsington Opera which, working with Snell, began to look for a new home. After agreeing preliminary designs for a new 600-seat auditorium, they eventually found a site in Buckinghamshire, in the Getty family’s Wormsley Park. It took the company a year to raise £3.5 million for the move from corporate members and devoted audiences, who pay upwards of £100 a ticket. 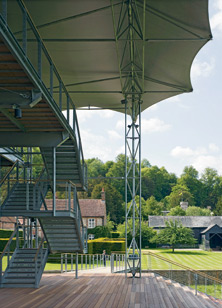 There were some preconditions for the new venue, mainly that it should be a temporary home as the lease lasts 15 years and the planning consent was for a temporary building. Also, both landlord and planners require Garsington Opera to dismantle its venue at the end of every season and move it offsite. So it was clear from the start that, like its previous incarnation, this was not going to be a conventional opera venue. The surrounding landscaped park at Wormsley is on an elevated position adjacent to Home Farm: a ‘village-like’ group of buildings with associated barns, outbuildings, stables, orchard, lawns and estate yards. This collection of buildings is very well screened from the main house, yet commands stunning views towards the lake and deer park across the landscape, similar to those of the main house.

Home Farm provides the ideal front of house setting, but also allows visitors to walk further afield to the lake. The estate buildings have a gentle feeling of intimacy which is in wonderful contrast to the stunning wide-open natural landscape. The Estate also provides another hidden gem, as visitors are able to take a short trip to the ‘secret’ walled garden.

The new auditorium is conceived as an elegant lightweight pavilion set within its parkland setting, elevated above the ground giving the appearance of ‘floating’ above the landscape. It features covered verandas and terraces, which contain bars and places to linger and enjoy the views. A pavilion is perhaps a fitting building type for an historic 19th Century Estate and provides a new ‘room with a view’. The new theatre is located in line with the lake and on the same north-south axis as Home Farm gardens. These gardens are very intimate and self-contained and have been replanted by Garsington Opera.

The auditorium design takes its cue from a traditional Japanese pavilion, such as the Katsura Palace west of Kyoto, in its relationship to its landscape setting and its use of sliding screens and verandas to link it to the landscape, both visually and physically. The idea of the pavilion theatre also makes references to the traditional Japanese theatre or ‘Kabuki’, the 17th Century classical dance drama, and its use of ‘hanamichi’ or flower paths, extended platforms and bridges which connect the stage to the audience, often enveloping them.

The site allows the division of areas between front of house gardens and back of house technical spaces, which remain screened from view. The ha-ha, separating the Home Farm buildings and main house from the park itself, follows the contours of the land and naturally creates the orchestra pit and under-stage trap room. The layout of the new structure is planned to allow the auditorium, verandas and terraces to face towards the landscape views, ideal places to gather and picnic. The stage, side stages and backstage store rooms are discretely located to the rear of the theatre next to the surrounding woodland, screening the areas from public view and allowing easy access for sets and performers. The new auditorium is planned on similar lines to the previous auditorium at Garsington Manor, whilst providing 600 seats and 6 wheelchair positions. Both seat widths and leg room are increased in the new house to improve audience comfort. 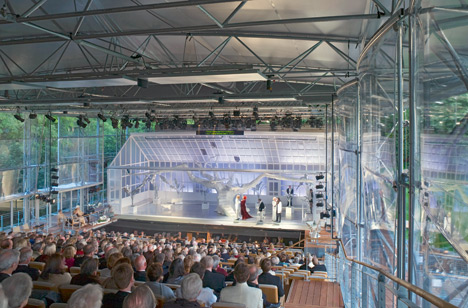 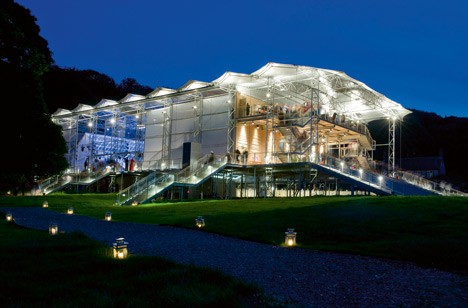 The auditorium is made from a limited palette of materials; timber, fabric and steel. The fabric used is a more traditional off-white colour. Hardwood timber features for the decked areas of the verandas, terraces and stage walls – which echo the feather-edged boarding of the traditional Oxfordshire barn. The enclosing walls of the auditorium use stressed fabric sails shaped to enhance the room acoustic and a double layer fabric roof absorbs rain noise like the flysheet of a tent. An outer roof membrane, which has been described as a ‘string vest’, disperses rain and reduces its noise level by 14 decibels. This is remarkable for such a ‘light’ building.

The requirement for the structure to be demountable led to an entirely bespoke structure being preferred to allow the roof and column trusses to be divisible into the minimum number of modular prefabricated elements that can be lifted by crane, minimising construction time and cost. The whole steel structure was prefabricated and galvanized, providing a maintenance-free, durable and corrosion resistant protective finish. The robustness of the coating will also be able to endure the temporary nature of the project – easily withstanding the continual erection/demounting processes. As the building is modular and entirely demountable it is an extremely flexible structure which can be adjusted as required to suit the changing opera performances. The sliding screen track allows the outer line of the building envelope to be adjusted in a matter of minutes (often at the interval during performances) to reflect climatic conditions, and the design of the tracks allows for additional screens to be installed as required. The integration of service requirements was carefully considered at the design stage to coordinate both the theatrical and house lighting positions and integrate them into the structure. Radiant heating panels are also used to heat the audience on cold evenings and these are suspended from purlins running between the roof trusses. The whole structure is conceived as a ‘Rig for Opera’.

The Opera contributes positively to the local area in terms of its economic and social impact, whilst any environmental impacts are temporary and have been minimised. The pavilion has been designed to be fully demountable and it will leave no permanent visual impact on the setting of listed buildings or the AONB (Area of Outstanding Natural Beauty) when removed as all foundations are below ground level. The new opera pavilion was constructed using pre-fabricated techniques which minimised material waste, reduced the construction time spent on site and allow the building to be assembled/disassembled as quickly and economically as possible (5 month on-site construction period). The project uses the minimum number of construction materials – steel, fabric and timber, all of which are recyclable.

Interactive RIBA-approved CPD As a result of our initiative for galvanizing in sustainable construction we have developed an online version of our CPDs, using the latest technology to deliver the same high-quality presentations via the internet. We have endeavoured to…

The Plus X gymnasium forms part of a newly-erected Citizens’ Centre in Mannheim-Jungbusch. An accessible roof area adds an extra dimension to the exterior of the municipally-owned building. The roof is reached by an external staircase, at the top of…

SportPark, at Loughborough University, is a bespoke sports administration hub which provides the gateway to the Loughborough Science and Enterprise Park. The £15m landmark building will be home to a variety of sports organisations including British Swimming, the Amateur Swimming…

The Austrian ski resort of Sölden has not taken long to earn a place in the international First Division of Winter tourism destinations. One reason for this is its successful staging of the “world of Alpine” experience. The addition of…