2015 marked the 50th anniversary of the official exchange of ambassadors between Israel and Germany. Lendler Exhibition Architecture developed a traveling exhibition that toured ten German cities to mark the occasion. 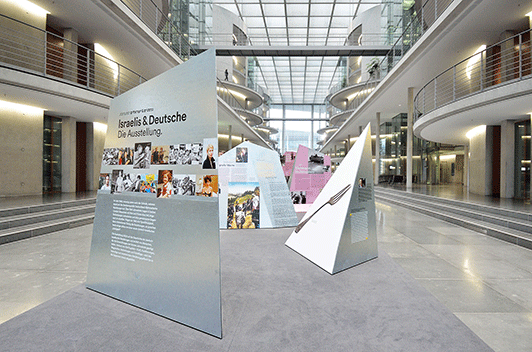 An identical Hebrew version was on tour in Israel. The German-Israeli relationship has developed over the years to allow both countries to reconcile the terrible consequences of the Holocaust.

The display aims to aid with the breaking of boundaries using the symbol of bursting boulders. The exhibition materials are made from galvanized steel panels, with images and text, digitally printed onto the surface. This creates the desired materiality that changes dependant upon the lighting conditions. More information can be found at: www.israelis-und-deutsche.de