Bikes ridden at speed around a banked arena seem to draw upon some primeval instinct that engenders a competitive edge for the riders and an almost uncontrollable zeal amongst the watching crowd. Maybe there is an intrinsic link within the human psyche to competition, speed and danger at close quarters that can be traced from the Circus Maximus in Rome through to the atmosphere created by the competitions that take place within velodromes of the modern era.

Fast forward to London 2012 and the competition for the velodrome design. This represented one of the unique opportunities within the venue designs. How to cater for a complex geometry that would offer unfettered sight lines for a seated crowd of 6,000 spectators within a sport that Great Britain was expected to win a number of gold medals.

The winning team of Hopkins Architects and Expedition Engineering followed a very simple design philosophy: that of the spirit of bicycle design – the pursuit of efficiency, lightweight construction, high performance standards and above all, synergy. “We took an integrated architectural and engineering approach“, says Mike taylor (Hopkins). “How to do more with less.“

The end result is a beautifully striking structure that is simple yet complex and sits quite lightly within its landscape. A doubly curved roof rests on top of an undulating, curvaceous base that houses the track and the seating areas. the shape of the roof has already earned it the nickname “the floating pringle”. A “shrink wrap” effect of the roof design helps to wrap the building around the track minimising the interior volume and in turn reducing heating and cooling requirements.

Early within the design conception a cable net roof support system was seen as the perfect fit for its form and span. there were however issues that needed to be resolved. Typical cable nets support lightweight fabric structures that work like a tennis racquet – a grid of cables in tension with a large compression ring at the perimeter to isolate the net‘s tension forces – the Velodrome cable net is not typical and presented two major challenges:
– a weathertight, insulated roof was needed, to retain the graceful lines of the building
– to dispense with the use of a large perimeter ring beam.

This twofold conundrum presented the biggest structural engineering hurdle on the project. The first challenge was how to connect the rigid roof deck to a flexible cable net structure and allow for the necessary movement joints. it was decided early in the design process that the cables would be clamped together by galvanized steel nodes at each intersection and that these nodes would be used to provide support for the prefabricated timber panels that formed the roof deck. However, these nodes would move relative to one another by up to 5mm under various load conditions, so it was not possible to connect the panels rigidly to each node. A clever solution was eventually adopted that enabled the timber panels to be fixed rigidly to only one node and allow them to slide via a slotted system on the other support points. 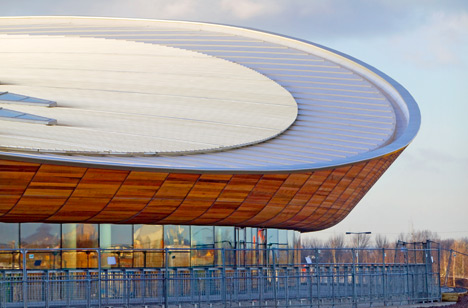 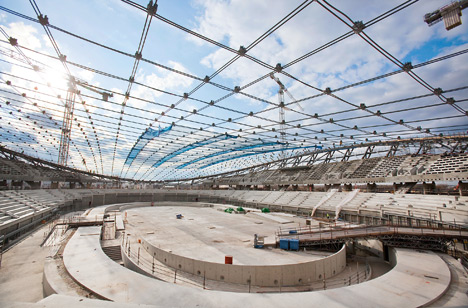 The second challenge involved designing a structure to transfer out the high cable tension forces from the roof. This would normally be achieved by having a large ring beam in compression around the structure. However this would interfere with the “light” touch design approach. The solution was found by designing the building‘s steel upper seating bowl and entire structure below to be mobilised in transferring out the cable forces. This had the positive result of only a small ring beam structure being needed that allowed a sharp eaves edge detail.

The net is formed of pairs of 36mm diameter spiral galvanized strand cables, on a 3.6m grid, and locked together with galvanized forged steel nodes at each cable intersection. The cables are pre-stressed so that the roof structure remains stable and in tension under all loading conditions. The 16km of cables were transported to site and the 1,000 or so nodes clamped to form the net before the whole structure was lifted to roof level. The entire on-site cable net construction process took only eight weeks. With the net lifted in place, the prefabricated timber roof panels were craned into position and the remainder of the roof added. “The roof has about 100 tonnes of steel in it and the structure is as light as the team dare go and still get the details to work“, says Mike Taylor.

The Velodrome’s double-cable net roof is the building’s most innovative feature and forms a key part of its light carbon footprint. Initial studies had shown that a conventional steel roof would be cheaper but the project contractor commissioned a detailed study to look at cost, programme and environmental aspects. This explored four options for the roof: gluam, gluam and cable, all cable and conventional steel. The study concluded that although the initial costs for the cable net option were greater there was a 3 month saving off the build programme – saving £2 million and a saving on the reduced amount of steel used. Compared with steel arches, the cable net used 27% less steel. There were also health and safety benefits from reducing the amount of work at height that would be needed. The final roof weight, including cables, nodes and ring beam, is a mere 30kg/m2, half that of the Beijing stadium. 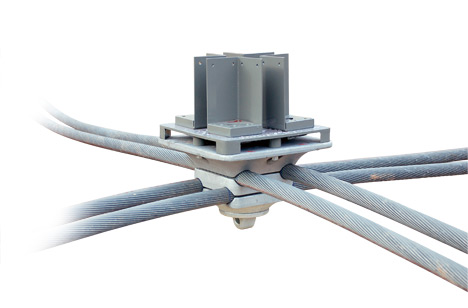 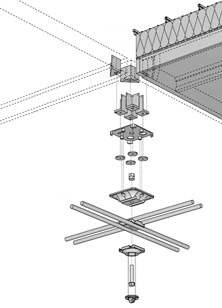 Situated to the east of London, encompassing four of the most deprived boroughs of London, the site that has become the Olympic Park started from very humble beginnings. The full legacy of centuries of industrial activity on the site became…