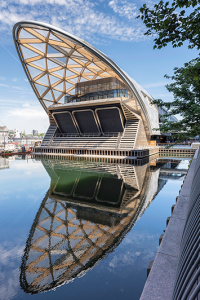 In 2008, Foster + Partners were commissioned to design a mixed-use scheme encompassing the over-ground elements of a new station for the Crossrail project at Canary Wharf. Central to the scheme, was a new enclosure unifying the station and other elements including new
retail units and a park, as well as furthering the main aim of the Crossrail project – to open up London from east to west.

The building is enclosed by a distinctive roof, which wraps around it like a protective shell. This 300 metre long timber lattice structure opens in the centre to draw in light and rain for natural irrigation. Timber has a great nautical and architectural history on the Wharf and this building is uniquely situated within the waters of West India Dock. 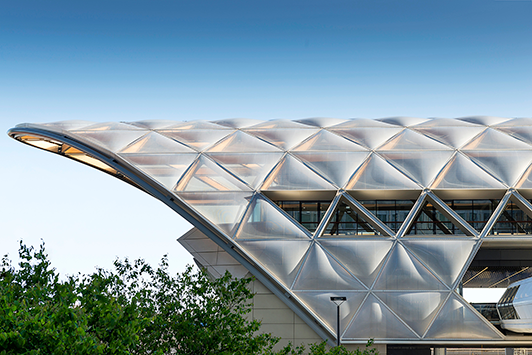 The design of the roof lattice is a fusion of architecture and engineering. Despite the smooth curve of the enclosure, there are only four curved timber beams in the whole structure. To seamlessly connect the straight beams, which rotate successively along the diagonals, the design team developed an innovative system of steel nodes, which resolve the twist.

The visual simplicity of the arching timber lattice belies the geometric complexity of the structure, which is made up of 1,418 beams and 564 nodes, 364 of which are unique. 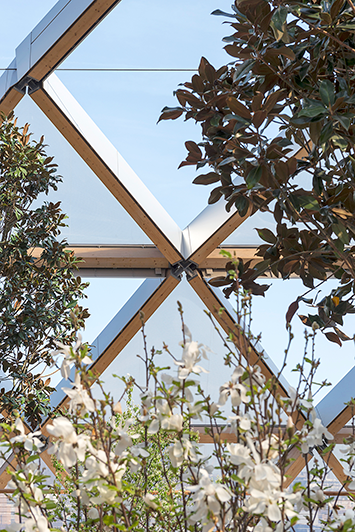 The nodes and beams support large triangular ethylene tetrafluoroethylene (ETFE) cushions. Geometrically, the nodes are the most complex component of the roof. This made protecting them using hot dip galvanizing particularly appropriate, as it could be carried out as a batch process off site, rather than painting, which would have made the process extremely labour intensive.

The axis of each successive diagonal beam twists as it coils around the roof, and this twist is taken up at the nodes. In addition, as the geometry of the building accelerates out over the cantilever, the incoming angles get successively more acute and asymmetric.

The nodes vary in size to accommodate this. In the central section of the roof the configuration of diamond shaped openings in the roof means that nodes with two, three, four, or five connecting beams stand alongside the typical nodes with six connections. To manage the complexity, the nodes were modelled parametrically and generated from the same geometric logic.

Each node connects to a beam plate fixed to the end of each glulam beam via timber screws. One of the advantages of using hot dip galvanized steel was the uniformity of the protective coating, which could be applied in a much shorter time.

The node design was developed by Foster + Partners in collaboration with Wiehag, who fed back data on structural analysis and fabrication constraints. To achieve the high level of accuracy demanded by the ETFE structure, the geometry of the nodes had to be very precise and a special jig was developed for construction. One of the key advantages of galvanizing the nodes was that it offered the most versatile and cost-effective way of protecting the steel in the long-term and allowed for ease of inspection during maintenance reviews. The galvanized nodes were delivered ready for use, without compromising the programme. 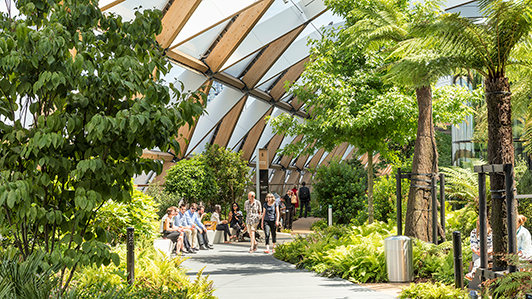 Posted on June 10, 2016 by Galvanizers Association