The link between local public transport and private car gives many commuters a tried and trusted way of escaping daily congestion. The pre-condition for this is suitable infrastructure consisting of adequate parking space and good bus and rail links. The Nördlingen transportation hub is a good example of this.

The hub, designed by the Morpho-Logic architectural practice of Munich, is adjacent to the Nördlingen railway station, and consists of a central bus station and a park and ride building. Here the bus station roof and the prominent façade of the park and ride building combine to form a new urban development. The new bus station is more than just a waiting room with a roof. It’s an urban space, in the best meaning of the term. In addition to 151 parking spaces, the hub provides 102 cycle parking spaces, 18 lockable cycle boxes, and public toilets.

Thanks to the choice of materials and colours, the roof and the west façade of the park and ride building combine to form a unity, which frames the newly-developed urban space and anchors it in the citizen’s consciousness. The bus station roof grabs the attention with its mass and helps to define two different areas: the waiting hall and the pedestrian walkway which runs along it. Its size is further accentuated by the apparent minimal supports: a series of main columns and tapered filigree ancillary columns. The main columns create the concept of a space leading towards the city, whilst the tapered columns, as they grow narrower, support the roof like filigree needles. 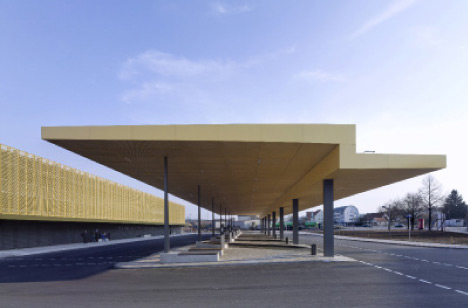 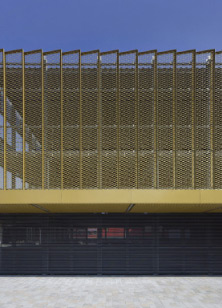 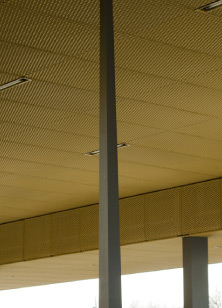 Opposite the roof, on the rail side, the prominent façade of the parking structure, which is also coloured gold, closes off the bus station. Together they form a canopy, which runs over the entire length, with vertical steel sections like scales as sheeting for the parking level. The basement façade, like all the other façades of the multi-storey car park, is faced with anthracite-coloured perforated trapezoid panels in horizontal layers. And so, even when the façade surfaces are closed off, a transparent veil-like effect is created by means of perforation, which creates a visual contact between the interior and the exterior that enhances the feeling of safety.

The entire load-bearing structure consists of hot dip galvanized steel sections. The sections are made from steel bars, put together to form rectangular sections; the roof girders consist of standard steel sections. The visible elements of the load-bearing structure are coated with an epoxy resin based coating. The roof covering consists of canted aluminium sheets, and the underside is made up of expanded metal panels with galvanized and powder-coated steel frames.

The structures not only combine to give uniformity but also make an impressive statement with the urban landscape.

A new sculpture at the heart of a busy junction leading into the centre of Belfast attempts to capture metaphorically and physically the rising of a new dawn for Belfast and Northern Ireland. Rise – a 30 m spherical steel…