The Nordstjerneskolen (North Star School) in the Danish town of Frederikshavn is a Public-Private Partnership Project. The durability of the materials, the minimizing of energy use and the importance of flexible design, which could also cope with the demands of the future, were key factors within the planning approval process for the project. 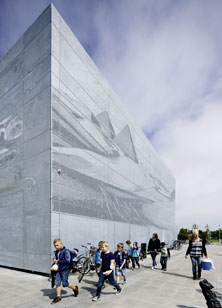 In terms of the Danish construction regulations, the school was listed as ‘low energy class 2020’, which roughly corresponds to LEED Gold. The two-storey school building, which has a total area of 14,000m2, accommodates 1,200 pupils, divided into kindergarten, primary and secondary schools. All classrooms have access to daylight and are naturally air-conditioned. In designing the school complex, the architects ARKINORD A/S and Arkitema Architects wanted to create surroundings in which teaching, learning and social activities could be linked with one another.

The design of the school is based on the concept of a star shape with each arm accommodating different age groups. At the centre of the star is a common square that forms the focal point for the School. All departments can be accessed through it and it forms the heartbeat of school activities from teaching, learning and social gatherings. Each point of the star makes up a department for two grades, each with its own identity and furnishings, designed for the age group it houses. In this way the large number of children are accommodated within a scale that appears natural, safe and inspiring.

The design for each of the facades of the school was inspired by the compass orientation of each arm of the star. The western arm represents the USA and Great Britain, while the others depict views of Scandinavia, Africa, the Middle East and the North Pole. Giant graphic images of symbols from all over the world form an individual facade cladding. The facade consists of 2mm thick sheet steel, which creates graphic images by means of thousands of perforations of various sizes that is subsequently hot dip galvanized. A technology developed by the perforated plate manufacturer RMIG makes it possible to convert artistic patterns, drawings and even photos into individual perforated facade surfaces.

Hot dip galvanizing not only enhances the optical and tactile properties of the facade, but also provides lasting and robust protection. This extends into protecting the areas inside and around the edges of the perforations