After a successful design competition, FaulknerBrowns Architects were commissioned by Rochdale Metropolitan Borough Council to design a new civic office to help achieve three strategic objectives: rationalisation of their estate from thirty-three buildings into one; provision of an environment which delivers ‘new ways of working’ and quality public space incorporating a new library and customer service centre; creation of a sense of community engagement and social transparency. 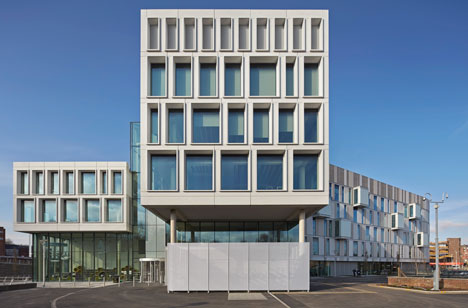 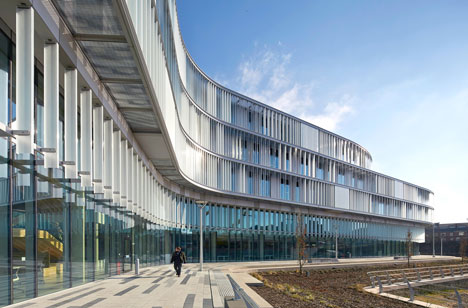 All of these objectives on their own would have challenged the design team; combined, they provided a unique opportunity to develop a special building within the challenging context of an economic downturn. Offering a new sustainable and modern working environment, the brief for the project was perhaps most radical in that it was underpinned by a desire by the client to bring just under 1,700 employees together, in one building, as opposed to 33 individual buildings. A key driver and resultant outcome of this approach was to deliver a building which is BREEAM ‘Excellent’ utilising the architecture and its engineering to achieve cost savings and efficiencies from an operational and maintenance perspective – the building saves over £1m per annum on energy alone. These savings have only been achieved through the adoption of an integrated design solution which harnesses all of the buildings engineering and environmental systems.

Transforming a previously dislocated and loosely connected organisation into one singular and unified entity gave the opportunity for the Council to adopt both new ways of working and also new ways of thinking. Coupled with an aspiration to improve and regenerate the immediate public realm and riverside area of a town centre suffering from a lack of investment, the design agenda had clear and defined aspirations from the outset.

The innovative arrangement of building floor plates not only offers workspaces that engage with one another but it also promotes a building form that engages with the external environment and riverside setting. The physical manifestation of weaving floor plates creates a rich internal workplace which accommodates a variety of work settings. 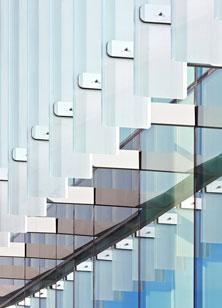 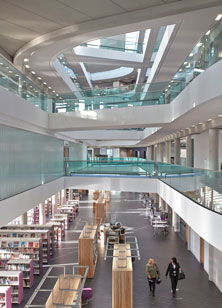 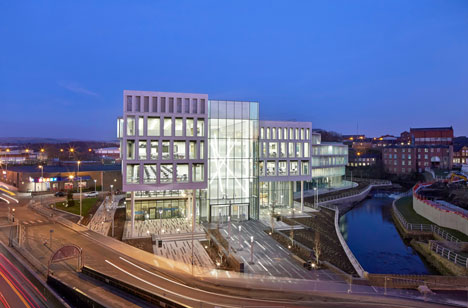 The fluid shapes which are expressed in the building’s form were developed in parallel with the building’s environmental strategy. The building elevations respond to their orientation – the riverside elevation adopts a series of cast low-iron u-profile glass fins which span floor to floor and offer passive solar gain control to the office accommodation. The spacing of these fins are compressed and expanded to reinforce the building’s fluid form.

A galvanized sub-structure was developed to support this façade system which included a sinuous access walkway which follows the line of the River Roch. The glass fin galvanized clamp detail was designed to ensure that it would hold each glass unit independently. The detail which was developed ensures the glass units are held at the base and head within an individual neoprene and silicone-filled shoe detail which helped to create a simple and elegant connection detail.

The maintenance walkways were integrated into this riverside elevation and were carefully detailed to reinforce the character of this elevation. It is composed of 1,200mm wide galvanized walkway units that are supported from cantilevered steel support arms which span 1.48 metres. Meticulous care was taken in the design and integration of each component of this elevation to allow the whole façade system to be connected back through a profiled aluminium recess channel. The primary support fins are 8mm thick which support a secondary steel arm which carries the main walkway and provides support to the head and base of the glass fins.

The galvanized finish compliments the surrounding palette of materials which has been created through the use of glass and glass reinforced concrete panels which adopt white and grey tones to create a powerful and contemporary architectural design solution.