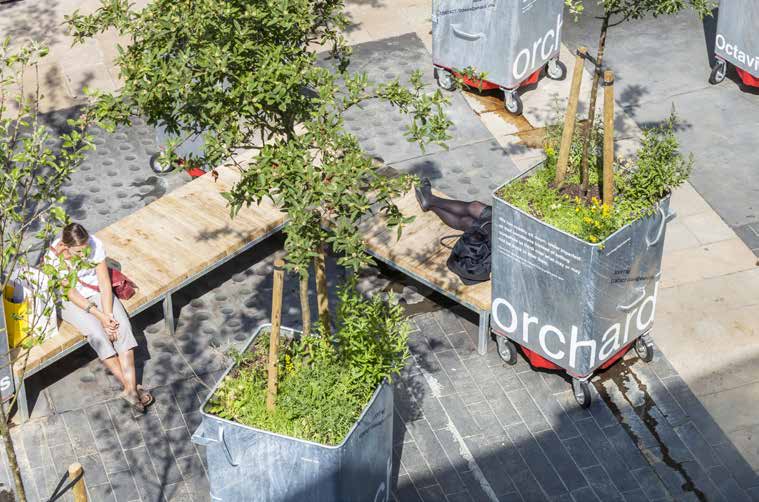 Take an everyday industrial use of galvanized steel, add a good dose of inspiration and hey presto! you have Octavia’s Orchard. The orchard draws attention to the current lack of accessible green space in urban areas and explores opportunities for both temporary and permanent greening of underutilised public and communal spaces.

The concept was dedicated and inspired by the work of Victorian social reformer and founder of the National Trust, Octavia Hill who, addressed problems of urban well-being and campaigned for open spaces in London.

The project was initially commissioned as part of the Southbank Centre’s ‘Festival of Neighbourhoods’ and produced in collaboration with the National Trust. Thirty-five ‘Chamberlain’ 940 litre galvanized steel bins, typically found in housing estates, were wheeled into position along Mandela Walk at the Southbank Centre, London during summer 2013. The bins, planted with fruit trees and meadow wildflowers, transformed this busy commuter route leading to Hungerford Bridge into vibrant orchard space. During the 4-month festival this temporary orchard formed a spectacular green entrance to the Royal Festival Hall, as well as a place to picnic and linger in the shade of the trees on bespoke benches that also formed part of the installation. 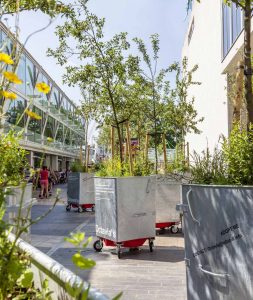 The orchard has now been relocated to its permanent locations on four housing estates in London. As part of the project local neighbourhoods were invited to adopt the orchard trees for their own grounds and four housing estates were finally selected: Trewlaney Estate and Pembury Estate in Hackney; Albert Barnes House in Southwark and Phipps Bridge Estate in Morden.

To help install and maintain these new orchards community groups were partnered with National Trust properties. Their expert gardeners provided support and training to each neighbourhood. In 2014, sixteen of the mobile bins were donated and installed on Moncrieff Place off Rye Lane, an unloved area at the entrance to Peckham Plex Cinema.

The orchard with its new integrated timber seating was installed over a period of two weeks with a group of local volunteers. A selection of fruiting trees with edible produce introduced wildlife and biodiversity to this otherwise hard urban landscape that in the past was occupied by London’s market gardens.

Last year the installation was moved to the rear of Peckham Plex Cinema and now awaits its next home. The outcome of this temporary installation intends to inform future permanent improvements along Rye Lane.

Architect: what if: projects

Posted on March 31, 2017 by Galvanizers Association

Germany’s first hot-dip galvanized steel bridge for road traffic was constructed in 1977. It spanned the Aller at Hademstorf in Lower Saxony and replaced a dilapidated wooden bridge built in 1942. The so-called oil bridge was originally built to provide…