With the world’s attention normally drawn to the high profile stadia that will host the various events for the Olympic Games, an important aspect that can sometimes get overlooked is that of accommodating, in London’s case, over 17,000 athletes and officials. 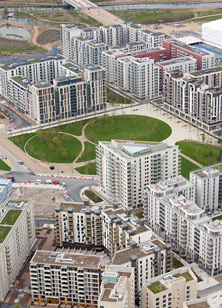 London’s Olympic Village however was of crucial importance from an early stage of the planning process. The Village will be used to transform a formerly deprived part of London and build the foundations on which inward investment can flow and form an important legacy project of the Games. The Athletes’ Village will be converted into 2,818 homes, half of which will form social housing. It is these social ambitions that make the Olympic Village the critical component on which London 2012‘s regeneration legacy depends. The £1bn development is the biggest housing construction project a British government has underwritten for decades. The design team took their cue from the grain and character of London. Three thousand trees have been planted. As well as the residential accommodation, a whole array of urban amenities have been interwoven into the masterplan, including public spaces, communal gardens, shops, a medical centre and a 1,800-student academy. The Village is split into 11 plots that comprise a total of 67 buildings. Seven plots have been designed by a single architect while the remaining four are the product of a combination of architects. The blocks are interspersed by a series of wide boulevards and public spaces among which there are two principal squares. A surprising yet refreshing feature of the designs is the use of generously sized balconies throughout the development. Attempts have been made to soften the grid and bring the façades to life by using an interesting palette of colours and materials in order to reflect the visual diversity of London. Panter Hudspith Architects‘ element of this unique project is in a prime location, fronting onto the main square in the middle of the Village. Their role comprised 123 apartments, 500m2 retail space, a concierge facility for half of the Athletes’ Village and the podium landscaped courtyard within the plot. 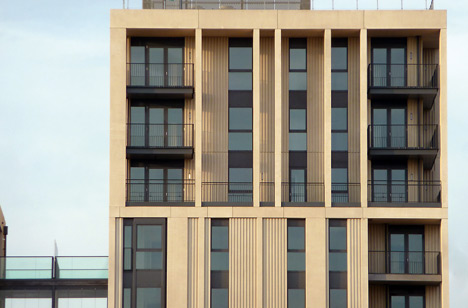 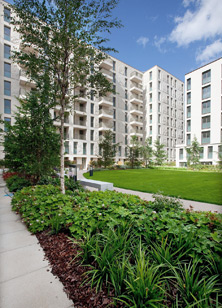 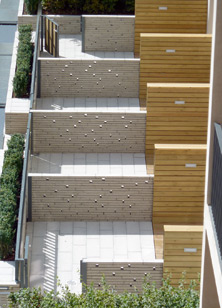 The design for these three cores introduced a number of key features to the Athletes’ Village:

In conjunction with this sustainability was a very important aspect of the design criteria. Extensive consultation at early stages with the client to rethink the original brief resulted in a reconfiguration of the massing to introduce an extra core, which enabled more than 85% of apartments to be dual or triple aspect, greatly enhancing their outlook and daylight quality. Careful analysis of glass proportions, reveal sizes and orientation meant that the combined passive measures alleviated the potential for overheating in summer, even using projected 2050 weather data. The roofing details were studied and have resulted in the extensive use of green/brown roofs throughout all cores, reinstating the original biodiversity of the site.

Offsite manufacturing was utilised wherever possible to minimise site wastage and improve standards, notably for the precast façade panels, balconies, bathroom pods, utility cupboards and metalwork. Any waste construction material on site was managed and segregated to aid recycling and reuse. Code for Sustainable Homes level 4 was achieved and the retail units achieved BREEAM Excellent.

The metal railings to the corner recessed balconies were given a subtle enrichment through the use of both metal flats and bars. Rather than the flats being evenly spaced, as would normally result from structural analysis, they were randomly interspersed. In addition, the quantity of flats is considerably greater closer to the ground where increased privacy is necessary, when the balconies are viewed obliquely. This also results in the railings acquiring a ‘lighter’ appearance with height. The balconies were seen to add an important contribution to the design of the development by providing an important link to the external environment and private ‘space’ for the permanent residents.

Galvanizing with painting was deemed to offer the best quality finish and long term durability reinforcing the sustainable credentials that had been followed throughout the project. The visual nature of the top rail of the handrails was deemed critical by both the design team and client, refining the overall perception of the quality of these corner balconies. The top rails were therefore given a further coating onsite producing a remarkably consistent and attractive surface.

At level 1, around the shared communal landscape courtyard within the plot, 250m of vent grills supply air to the parking below. The use of a galvanized finish produced a very uniform and discrete mid-toned grey band either side of the pathway that surrounds the courtyard. The metal railings on the podium deck which line the edges of the townhouse gardens was procured under the landscaping package. The steel was galvanizied and powder coated to achieve the required aesthetic and at podium level, the railings were in-filled with timber to provide privacy. As such, the nature of the podium railing is very different to the apartment balconies and the end result produces a very refined, elegant aesthetic that convincingly conveys the quality message that is synonymous with the Athletes’ Village.

Bikes ridden at speed around a banked arena seem to draw upon some primeval instinct that engenders a competitive edge for the riders and an almost uncontrollable zeal amongst the watching crowd. Maybe there is an intrinsic link within the…