Art and engineering in harmony

A new sculpture at the heart of a busy junction leading into the centre of Belfast attempts to capture metaphorically and physically the rising of a new dawn for Belfast and Northern Ireland. 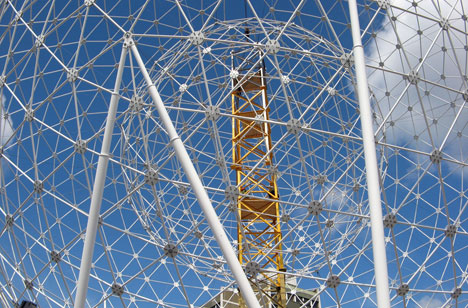 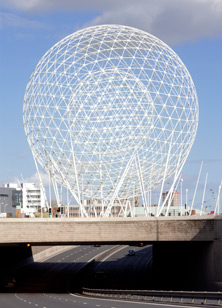 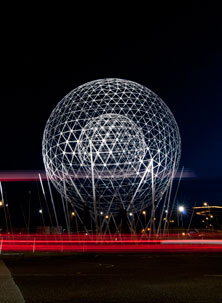 Rise – a 30 m spherical steel sculpture designed by Wolfgang Buttress and Price & Myers hovers over the Broadway roundabout, at the junction of the Westlink and M1 motorway, a main gateway to the city where 500,000 cars a week will flow past. The sculpture is located within the Blackstaff Ward which is in South Belfast. This demanding idea was complicated by the fact that this was the second commission for a sculpture in this location following the failure of a previous scheme, which was not feasible to construct for the given budget.

The tight budget and grand ambition called for a solution where the artistic piece was a pure engineering object that used the minimum amount of material to its maximum efficiency. Two hovering concentric geodesic spheres made from 60mm diameter tubes was the solution that was arrived at with the Artist to realise his vision.

The outer 30 m diameter sphere is held aloft with 21 carefully positioned slender steel columns. These columns are inclined so that they brace the sphere laterally and support its weight by meeting it at an exact tangent to the surface. The inner 15 m sphere is held by a network of cables that create a three dimensional tensegrity within the outer structure, making it appear to float. All together there are 2,421 tubes and 804 bolted joints. 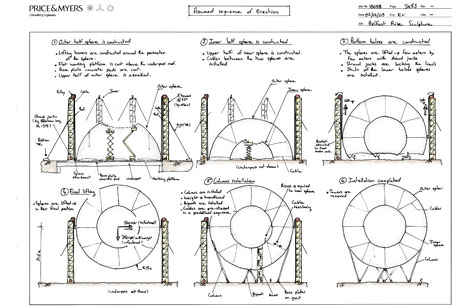 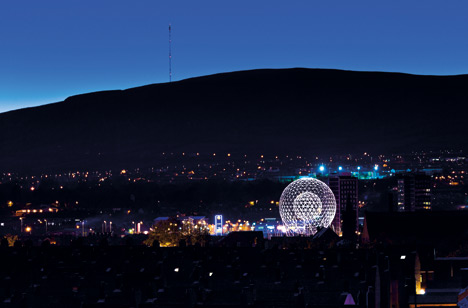 All the tubes and cables forming the structure have been galvanized using a duplex coating combining galvanizing and powder coating. The system blends the performance benefits of hot dip galvanizing with the extensive range of colours from powder coating, meaning the artist had a choice of colours and that the sculpture is maintenance-free for its expected lifespan. The coating used an off-site application, reducing site congestion, delays for wet trade finishes, and scaffolding. 1,600 discs (400 mm x 8 mm) and 2,400 poles (average length 2 m) were galvanized and coated to give a textured white finish.

Finding a way to build the sculpture effectively and safely was one of the most challenging aspects of the project. Several different methods were proposed, with the eventual solution being that suggested by the fabricators, Hassons. A key approach to the fabrication was the use of CNC technology that ensured accuracy to minimise construction tolerances and facilitate this method of erection. Rise is the largest public art sculpture in Belfast and is visible for miles around the City. At its heart is the combination of clever structural design that creates simplicity out of a complex form using the minimum amount of material.