Located on a peninsula between Tampa Bay and the Gulf of Mexico, Florida’s St. Petersburg – a city that has earned the nickname “God’s waiting room” for its popularity as a place of retirement – is perhaps not the first place you’d imagine much in the way of culture, let alone ground-breaking architecture. 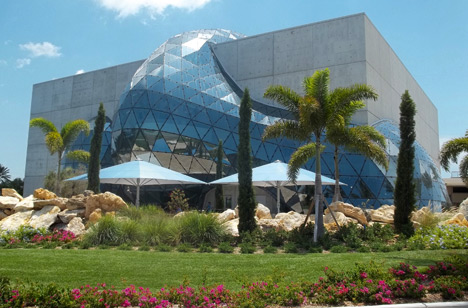 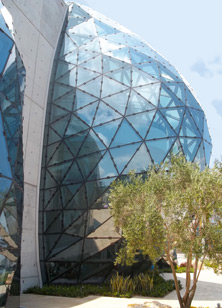 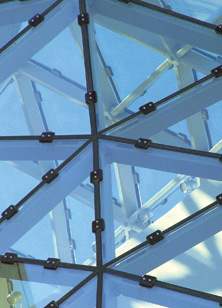 Yet, the newly opened Dalí Museum houses the largest collection of Salvador Dali’s work outside of Europe and replaces the original 1982 museum. The 6,300m² structure houses a 2,140-piece permanent collection. The new Museum was designed not only to represent the artist, but to protect his works from the elements. Since Florida is prone to powerful hurricanes, the art is located above the flood plain and housed within 45cm thick reinforced concrete walls. The museum can protect the prized collection from up to a Category 5 hurricane storm surge and 165mph winds. The new design, courtesy of HOK Florida, is probably a fitting home to history’s most famed surrealist painter.

Inspired by both his art and the need for a secure home, HOK have created a stunning concrete block that is slashed by a mass of oozing lava-like glass that the artist would be proud of. Made from 1,062 individually shaped 4mm thick glass panels, some have described this as the “Enigma”. The steel elements of the structure have been given effective and long-term protection against the elements by means of a duplex system which is a combination of hot dip galvanizing and a subsequent wet or powder coating. The surreal design for the museum is also reflected internally with an eye-catching spiral staircase that references Dali’s fascination with DNA, the golden rectangle and the Fibonacci series. The amazing curve is a structural tour-de-force, with the reinforced concrete spiral functioning as a tensioned spring held at ground level and at the third floor, with the stair treads cantilevered from the central spiral.

This year has seen another eclectic set of submissions across the whole spectrum of the construction sector, lending even more credence to galvanizing‘s suitability for any project – be it industrial or high-end in nature. Having gone through the difficult…

One of the most architecturally and culturally significant locations in the UK, Chatsworth House receives over 700,000 visitors per year. Positioned in a key site just off the main lawn, Corin Mellor’s sculptural bench was commissioned by the Duke of…

The Swiss architects L3P have taken an interesting step away from the orthadox approach of designing two free-standing houses. They have taken the basic form of a pair of typical semi-detached houses and recreated a new relationship between two separate…