Langreo, located in Northern Spain, is a place where you would be forgiven for gaining the impression that free space was at a premium. A combination of topography, industry and a dense housing footprint give credence to first impressions. ACXT architects were set the unenviable task of converting an old coalfield into something very different. 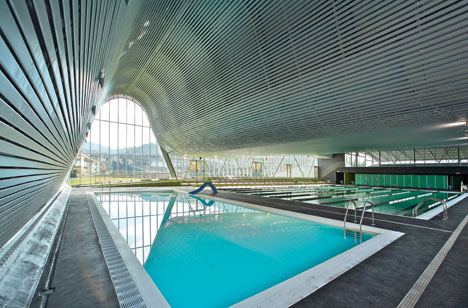 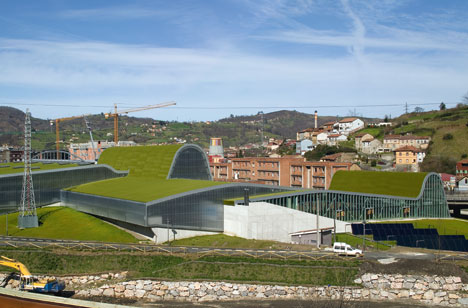 The Sports and Leisure Centre in Langreo (Asturias, Northern Spain) attempts to create a new open landscape rather than just a new building. It minimizes the impact of its volume. It plays with imaginary tectonic forces acting on the valley by folding the ground. The building is a composition of folds, of green waves correlated with the different interiors. The aim of the design was to provide a model for the redevelopment of the immediate area. The surface area of the green roofs could be extended to form plazas and gardens in adjacent areas currently occupied by ruined buildings. The initial idea of designing the roofs for people to walk on was abandoned from health and safety issues and probable high maintenance costs. These were finally covered with artificial grass. The L-shaped area where the building is erected, is a highly constrained space. Its boundaries include a train commuter platform, police headquarters, the Nalón River and the local football field. The rhythmic external volume is the direct expression of the interior needs: larger height clearance in the sports courtyard and the rhythmic gymnastic area, lower levels in the swimming pool, and so on. In this way, three “hills“ can be distinguished in correspondence with the functional divisions: the multi-purpose sports courtyard, the closure of the swimming pools and the general service area. Within the “hill“ structure, there is a predominance of black and green colours. Large concrete block walls, painted in black, seem the shrine to the culture of the ancient mining areas. The black of the coal makes a perfect contrast to the green of meadows of this beautiful Spanish region, always illuminated by ochre, yellows and oranges. The symbolic folding of the topsoil reveals the strata and massive coal subsurfaces, as it happens in the surrounding of the swimming pool, painted in black. This simple but effective solution reminds the spectator that Langreo is the Spanish capital of coal mining.

The materials used for finishing the interior have been carefully chosen, durability and functinality being of utmost importance. Apart from the artificial grass, the roof has 10 cm of rock wool insulation, which provides excellent thermal and acoustic insulation.

The ceiling of the swimming pool area consists of perforated galvanized strips which form an almost absorbent veil, providing protection as well as helping to accentuate the undulating profile of the external profile. This is the only area in the whole building designed with a transparent skin, which also does a great deal to accentuate the unpleasant echo typical of these structures.

Reduce, reuse and recycle are the dominant keywords in the international discussion on sustainability with regard to construction. The triad which combines the reduction of waste volumes by avoiding waste, reusing materials as directly as possible and material conversion through…

The first of a group of five experimental houses has been erected on the campus of the Technical University of Kaiserslautern. Various high-performance building materials are being subjected to a practical test as part of the so-called Small House Village…

Two identical villas in Berlin have been created by Schneider and Schumacher Architekten, Frankfurt. The cantilevered roof design helps to create a versatile outdoor area at the back of the villa. A series of galvanized profiles creates an extension of…

The almost brutal design for the new laboratory building on the University campus of Alcalá serves a dual purpose: that of hiding and creating a mystical space. The Architects were given a difficult design conundrum: to group a series of…