The Austrian ski resort of Sölden has not taken long to earn a place in the international First Division of Winter tourism destinations. One reason for this is its successful staging of the “world of Alpine” experience. The addition of the new Gaislachkoglbahn funicular has also added to its popularity. 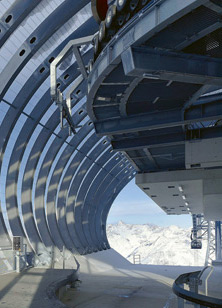 The new funicular combines the most modern technology with architectural demands which set a new standard for installations of this kind. The three new cable car stations, designed by the Innsbruck architects Obermoser Arch-omo, consist of a valley station, a mid-way station and one on the mountain itself giving the location a recognisable, unmistakable visual identity.

Thanks to their openness and transparency, the mighty structures seem very light and give those using them a pleasant feeling of security. There are no hidden angles or corners. Right from the start, the passenger becomes a part of the imposing natural scene. The three stations achieve this effect using suspended hot dip galvanized steel structures, which have been covered by a transparent membrane. When it gets dark, the stations transmit light signals into the night sky, creating the impression of glowing giant sculptures in the form of Chinese lanterns. 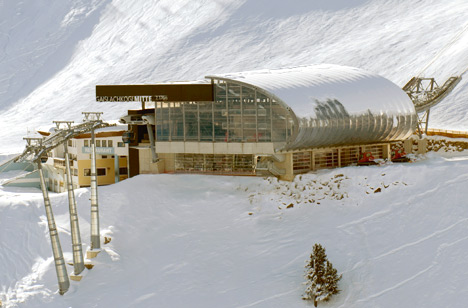 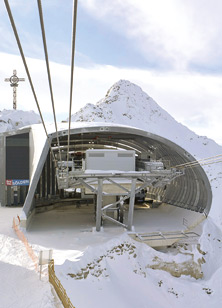 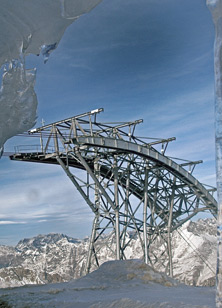 In the valley station, the cable cars are “parked“ above the level of the station – the first time this has been done anywhere in the world. This was the only way that the generous space allocation plan desired by the operator could be brought into existence on the cramped construction site. The filigree steel structure and the transparent envelope ensure that everyone can see and experience everything that happens within the station. The mid-way station is more than a terminal where passengers can change cars. It invites them to linger as if in a box at the theatre and look out over the unique mountain landscape. It also acts as a garage for snow groomers and other Alpine operational equipment.

The mountain station, situated at a height of 3,040 metres, leans against the mountain peak and projects bravely out over the steep precipice. The cocoon-like structure recalls the lightness and timeless elegance of a giant coil spring, split open lengthwise, which is hovering in the landscape. The steel load-bearing systems of the three stations, together with the steel structures of the two aerial ropeways which link the stations, have been given long-term and sustainable protection against corrosion using hot dip galvanizing. In contrast to coatings, which react extremely sensitively to UV light, galvanizing is fully UV-resistant. The long-term protection provided by galvanizing gives maximum security.

It also guarantees that as long as the Gaislachkoglbahn is in use no maintenance work will be needed for corrosion protection purposes. The link between the valley station and the mid-way station is created through a high-powered closed-circuit gondola system with a capacity of 3,600 passengers an hour, unique in the world. The last stretch up to the summit station makes use of a wind-stable triple-cable aerial ropeway which can always bring the passengers back to the station without them having to leave the cabins in case of a technical hitch. Spectacular helicopter rescues thus become unnecessary.

Interactive RIBA-approved CPD As a result of our initiative for galvanizing in sustainable construction we have developed an online version of our CPDs, using the latest technology to deliver the same high-quality presentations via the internet. We have endeavoured to…

The Plus X gymnasium forms part of a newly-erected Citizens’ Centre in Mannheim-Jungbusch. An accessible roof area adds an extra dimension to the exterior of the municipally-owned building. The roof is reached by an external staircase, at the top of…

Garsington Opera, founded in 1989 by Leonard and Rosalind Ingrams, stages summer festivals. It forms part of the ‘summer season’ activities that are peculiarly English. The venue hosted outdoor performances of both popular and experimental opera, and is obviously accompanied…

SportPark, at Loughborough University, is a bespoke sports administration hub which provides the gateway to the Loughborough Science and Enterprise Park. The £15m landmark building will be home to a variety of sports organisations including British Swimming, the Amateur Swimming…