Industrial, unfinished, tough, resilient, durable; just some of the adjectives that have been used to describe hot dip galvanizing. The use of the coating within the built environment has a long history and its recent popularity as a finish for facade panels, especially in Germany and Scandinavia, is testament to its inherent characteristics and benefits.

Galvanizing’s link to the built environment can probably be traced to the use of galvanized corrugated iron sheets as a roofing material in the 1850’s. The first building to use corrugated iron was the Turpentine Shed, during the expansion of London’s docks in 1830. The corrugations made the sheet more rigid so that less framing was required to support it as a roofing material. It was praised for its elegance, simplicity and economy. 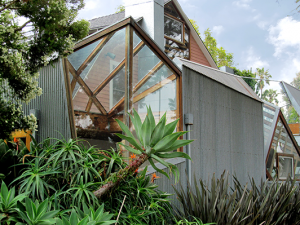 It was soon realised that the iron corroded quickly, this was solved over a period of time by the introduction of hot dip galvanizing the corrugated sheets. Although uncertain, the first use of galvanized corrugated iron is believed to be for the Royal Navy at Pembroke Docks, Wales in 1844. Galvanized corrugated iron was also used by Isambard Kingdom Brunel for Birmingham’s New Grand Central Station and Paddington Station in 1854.

Through the passage of time, iron has been replaced by steel as one of our main building materials and the use of galvanizing has changed along with this. There still is interest in using corrugated sheet as a facade type material today. Frank Gehry used galvanized corrugated metal as cladding for the house and studio of the artist Ron Davies, as well as for his own house; a 1920s bungalow which he reconfigured in 1977. 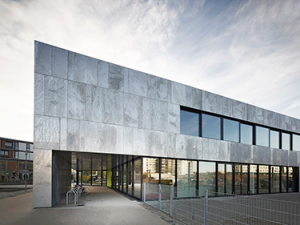 More recently galvanizing has been used within a facade system in a totally different way. h.s.d.architekten have used 3 mm galvanized steel panels to create a bold, contemporary aesthetic for one of their most recent projects in Karlsruhe.

Sarah Wigglesworth Architects took the same pricipal of galvanized panels for the James Leal Centre, with a different approach and end result. Solid and perforated galvanized panels were used to create a powerful dialogue with other materials and the natural setting of the building. 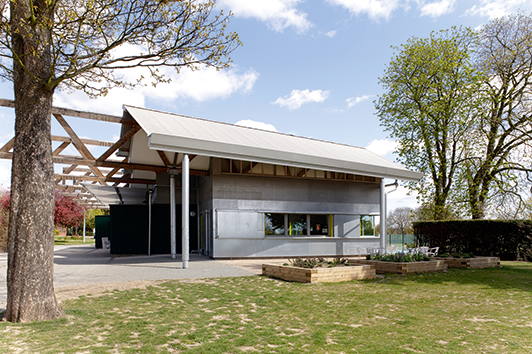 Posted on June 18, 2016 by Galvanizers Association