Designed to create a traffic-free oasis in the heart of a city plagued by congestion, the modern campus for Turin University has definitely made a statement. Since the 1990s, the university of Turin has gradually moved all of its faculties to a new campus situated on former industrial land bordering the River Dora. The new campus was recently completed with a master plan by Foster + Partners and realised by local architect/engineers ICIS. Who to their credit adopted all of the original Foster design concept. The campus houses faculties of law and political science along the edges of a triangular plot incorporating a modern interpretation of the traditional cloistered quadrangle,formed of two linked buildings, unified by a single roof canopy and arranged around a central courtyard. 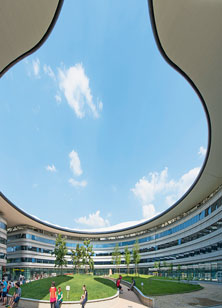 The new complex has had a significant impact on the cityscape of Turin transforming the nearby river into a focal point and established important links with the city centre and surrounding road network. It has become a new landmark for Turin, particularly as a result of its large tensile roof structure which can be seen from across the city.

A new four-storey library is located on the northern edge of the site, parallel to the River with the Law and Political Science faculties to the south. Each faculty has its own entrance from the central courtyard. The ground floor accommodates lecture halls, circulation and social spaces, with teaching and faculty rooms in the quieter levels above. The first floor is visible as a mezzanine in the double-height entrance atrium to each faculty, animating the linear route that runs the entire length of the building. A second floor balcony incorporates entrances, as well as seating and informal breakout spaces and a roof garden at the top of the Political Science faculty provides a quiet space for study. Floor plates are flexible to support changes in teaching priorities, and an innovative design for the 500-seat auditorium allows it to be split in two.

The cantilevered membrane roof which gives the appearance of floating above the campus adds a unifying element. The canopy, with its large overhang, was designed to introduce effective passive cooling strategies. This feature in combination with the intelligent building systems and tri-generation heating and cooling will allow the facility to use 20% less energy than other buildings of the same size and function. 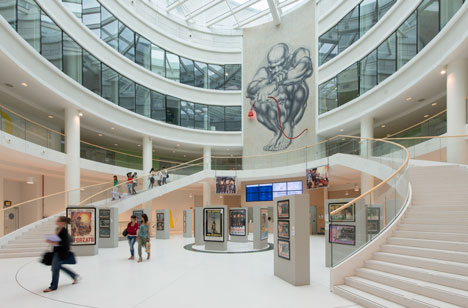 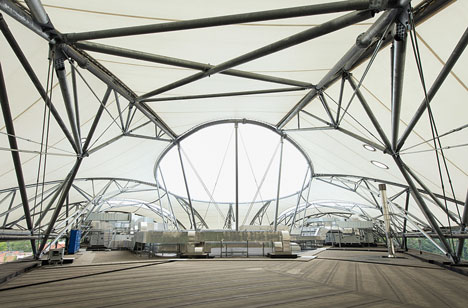 A 16,700m² membrane stretched over 54 galvanized steel arched frames, generating a wave effect that is characterized by a constantly changing curvature, floats above the new campus. It required sophisticated engineering with allowance being made for deformation in the event of an earthquake.

Its substructure is formed by a complex three-dimensional steel structure composed of a series of arches connected together by an impressive edge beam (necessary to counteract the high tensile forces). A network of galvanized steel hollow sections are used to form arches that vary in length from 20m to 52m. These were preassembled off-site in the form of 108 mini trusses that, once raised and positioned, have been connected to form the final single arched module. The whole structure is bound together by the 1,000m long perimeter edge beam.

The use of steel enabled the variation in size to be easily taken into account and for prefabrication to take place off-site. This enabled the whole structure to be completed within 6 months with teams working in parallel on the project completing up to 12 units a day.

The new addition to Turin, with its sweeping structure that is environmentally and site conscious, has already become a recognised landmark. Movement, connection and participation are emphasised throughout the new campus. Measures such as hardscaping that employs 7,200 photocatalytic paving tiles to help neutralize the movement of pollutants such as dust and the meandering green ‘philosopher’s walk’ add to the creation of a connected space. 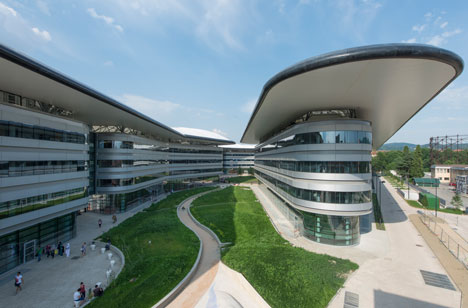 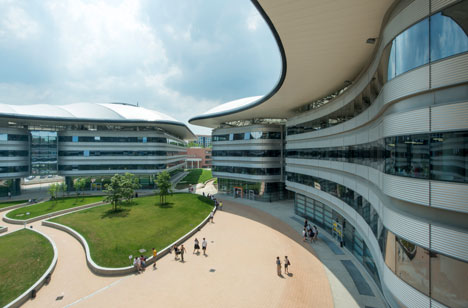 Rubbing shoulders with its famous Bauhaus neighbours, B10 makes its own innovative statement. Many aspects of the interactive house look like something from a James Bond film with its self-learning energy management system and automated facade sections. B10 generates twice…

Now over twenty years old, the Ellis-Miller House was designed by Jonathan Ellis-Miller while working for the eminent modernist architect John Winter. Winter had built two houses for himself including 81 Swains Lane, London in 1969, which is now grade…

This innovative design for The Kiosk came about as part of a change of use application for the neighbouring retail unit, which had previously been used as a florist. The concept for the rippling CNC-cut timber layers of the facade…

The Social Care and Health Centre in the city of Móstoles (Southern Madrid) has been designed with two crucial design considerations: the creation of a multipurpose space on a very tight budget. Located in an area of urban expansion, its…