The resistance of galvanizing to atmospheric corrosion depends on a protective film which forms on the surface of the zinc. When the steel is withdrawn from the galvanizing bath, the zinc has a clean, bright, shiny surface.

With time this changes to a dull grey patina as the surface reacts with oxygen, water and carbon dioxide in the atmosphere. A complex but tough, stable, protective layer is formed which is tightly adherent to the zinc. Contaminants in the atmosphere affect the nature of this protective film.

The most important contaminant for zinc is sulphur dioxide (SO₂) and it is the presence of SO₂ which largely controls the atmospheric corrosion of zinc. The corrosion rate for zinc is generally linear for a given environment. A major advantage of this is that it allows predictions of ultimate life to be made on the basis of interim assessments of coating thickness.

Guides for protection against atmospheric corrosion

Given the wide range of environmental conditions encountered and protective systems available, data on performance can become complex. A number of guides have been produced giving the design life of protective systems in different environments.  Up-to-date information in assessments of coating life can be found in EN ISO 14713-1 or by contacting Galvanizers Association.

The environments in most corrosion guides are necessarily general. Specific corrosivity values in the UK have been mapped by the Agricultural Development Advisory Service (ADAS). The information was based on data obtained from exposure of zinc reference samples at National Grid Reference points in a large number of 10km square reference areas of the UK.

The results indicated varying rates of corrosion for zinc in different exterior locations in the UK. Galvanizers Association sponsored the revision of the map, to provide specifiers with the very latest information on zinc corrosion. For the first time the survey was extended to the Republic of Ireland. The same experts that were involved in the development of previous corrosivity maps were contracted to coordinate the project. 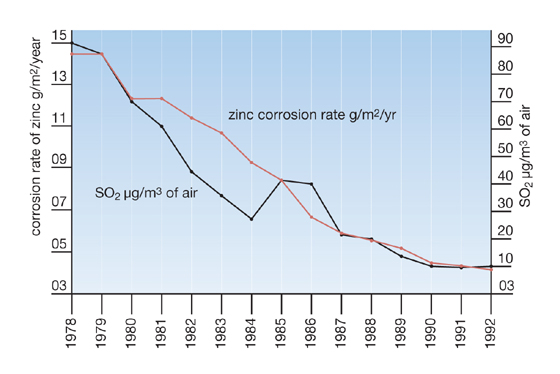 Comparison of data obtained from the corrosion map with results from previous mapping programmes (1982 and 1991) show a clear, and very significant, drop in the corrosion rate for zinc for most atmospheric exposures across the UK and the Republic of Ireland.

Performance in other environments

How long will galvanizing last in your area?