This former Dorville Hotel had lain empty for over a decade before conversion. It was in a parlous condition, having suffered from vandalism, squatters, fire, water ingress and general decay from the elements and lack of maintenance. It was regarded as a blot on the landscape much to the concern of the local community which was desperate to see the building converted or replaced. The conversion of the building was a great challenge in terms of working with the existing structure which comprised of a pair of Georgian/early Victorian semis with cumulative uninsulated extensions, the last being in the 1960s/70s.

Challenges overcame included the creation of new party walls & floors associated with subdivision into flats; sound proofing including flanking transmittance; thermal insulation of the external envelope; structural alterations and upgrading; drying out of the existing structure and the creation of new balconies to the rear to exploit the coastal views. 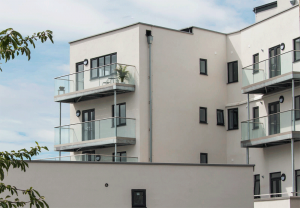 We consider the completed building is a radical improvement over the existing, with simple lines and a design that pays homage to the original building’s Art Deco/nautical aesthetic.

In order to create an external space for each apartment a series of bespoke galvanized balcony structures were designed to the rear of the building. The natural galvanized finish was chosen for its long term and robust protection and is reflected with the specification of all the rainwater goods.