Brighton & Hove Albion football club’s purpose-built training facility, known as the American Express Elite Football Performance Centre in Lancing, was originally opened in July 2014 and is widely considered to be one of the best Category One academy facilities in the UK.

Spatial Structures Ltd were awarded the contract to design and build a three-quarter size indoor training pitch as part of this facility, as a nominated sub-contractor working alongside Brighton & Hove Albion and Buckingham Group. The indoor pitch was constructed using our signature galvanized steel frame superstructure and tension membrane fabric. 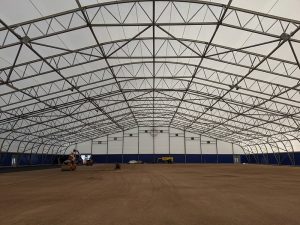 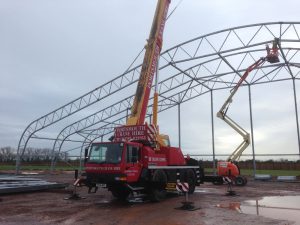 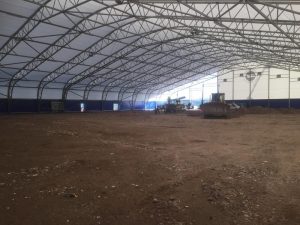 Due to the success of the football club in the period since 2014 (i.e. promotion to and establishment within the Premier League, increased number of academy players and the rise of the women’s football team), planning permission was secured to expand the facilities in Spring 2019. The expanded facilities included additional pitches and the extension of the Y-shaped main accommodation building. The extension of this building resulted in the need to relocate our indoor training facility some 70 m to the south of its current position.

Working once again with the club and Buckingham Group, Spatial Structures Ltd were set the task of reusing as much of the original structure as possible.

Significantly, the main galvanized steel frame was reused in its entirety, alongside the lighting, doors and rebound walls. Whilst the fabric and artificial turf could potentially have been reused, the club decided to install new items in this regard. 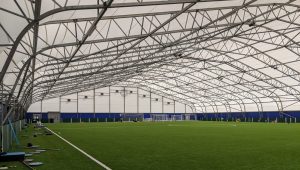 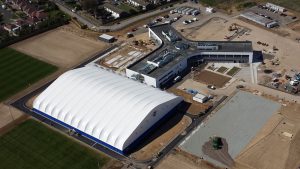 By reusing key elements in this relocation, not only did this save the client significant amounts of money (approximately half of an entirely new facility), it was a highly sustainable option to avoid wastage as much as possible. Hot dip galvanizing the steel frame was a key factor in ensuring that it could be fully reused in the relocation, especially given the location within an otherwise corrosive coastal environment.

The relocated indoor training facility was reopened at the end of 2019. This was an important project to showcase that not only are their structures permanent in nature, but they can also be relocated should the need arise, galvanizing the steel frame was an essential part of this. Furthermore, it shows the sustainability credentials of their buildings.​​​​​​​