The galvanized steel supporting structure has been kept to a minimum and covers no more than 15% of the surface area. 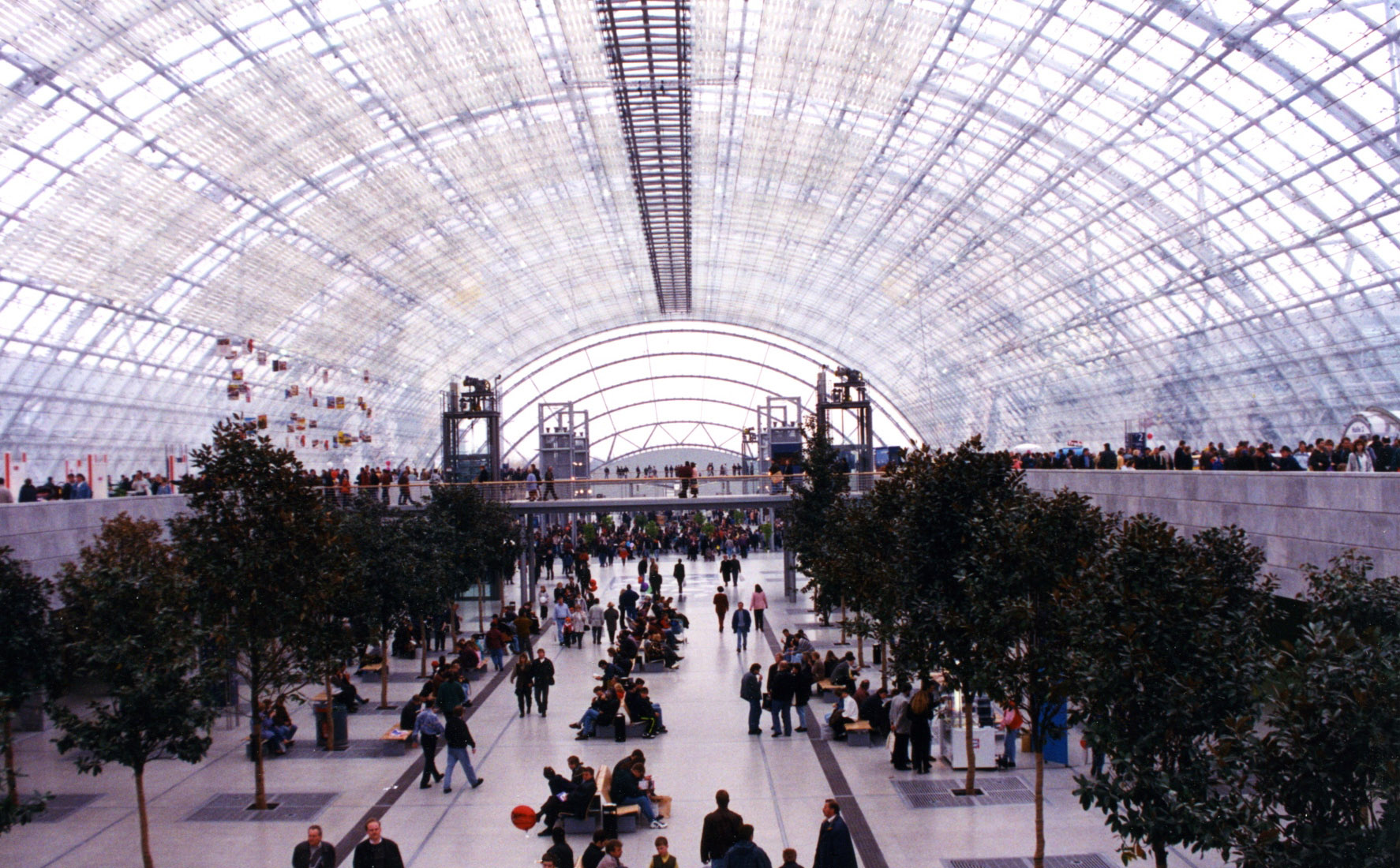 The hall was part of an international competition winning scheme that came about through the collaboration of Ian Ritchie Architects with their German partners Von Gerkan Marg und partners Architekten. It provides a major space for reception, relaxation, information, informal meetings and formal events. The hall, which is approximately 250m by 80m, has a glazed surface with an area of about 2.8Ha or 7 acres.

The principal judge for the architectural award, Dr. Mark Swenarton, commented on the 1996 winners: “In the Leipzig Messe by Ian Ritchie Architects, the designers had explored the particular qualities of galvanized steel and used those qualities to find innovative solutions to design problems. This huge new exhibition hall in Germany is as remarkable for its elegance as its size. Hot dip galvanizing was used here to protect the inner face of the steel tubes that form the structure and the potential of the galvanizing process, in terms of length of steel members that could be coated, was fundamental to the design from the outset”. 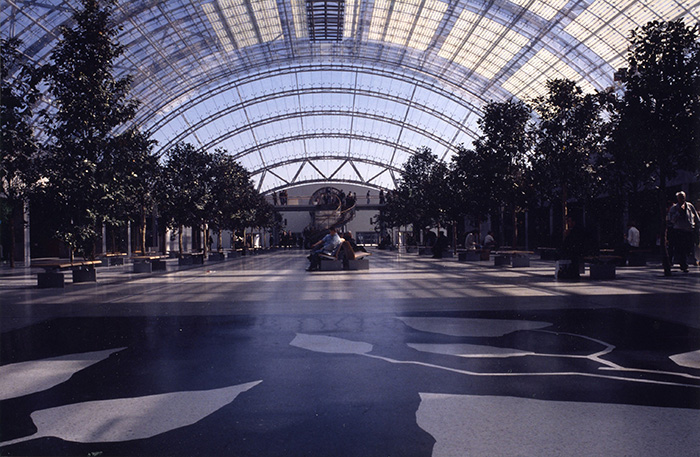 The daily press and the specialist press in Germany have written extensively about the Central Exhibition Hall in Leipzig- covering many different aspects and in various forms and styles, but always taking a positive view. This has only seldom, if ever, occurred with a German construction project.

So we think it makes sense, after reporting that the hall has been honoured as the project which won the GA Galvanizing Award, to quote what other have written at this point, rather than give a rather more detailed account of our own.

We are therefore reproducing below, with only few minor amendments, what the biggest weekly periodical dealing with the construction industry in Germany, the “ABZ Allgemeine Bauzeitung” said of the project in its June 1996 edition:

The “Crystal Palace” of Leipzig: technically something of a world’s first.

The new Leipzig exhibition centre has been officially declared open at a ceremony attended by the president of the Federal Republic of Germany, Roman Herzog. The technological and functional core is the central glass hall with its hot dip galvanized steel construction- the only construction of its kind in Europe. 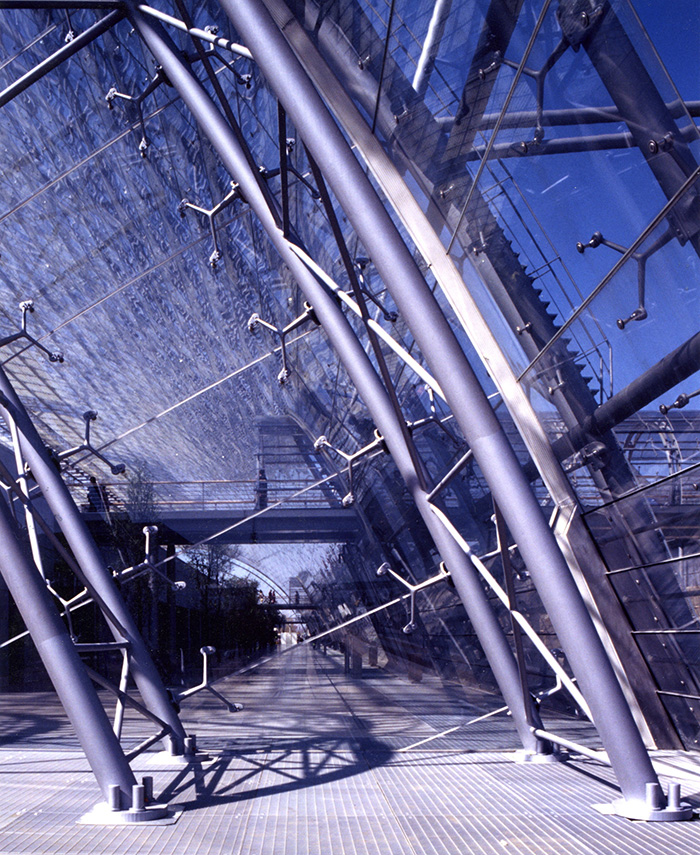 Before the official opening, the designers and engineers involved in the construction, together with executives of the companies carrying the work out, had already given a paper about the project, at a well-attended symposium organised under the auspices of the Saxony Chamber of Architects, at the end of April.

The dimensions of the central glass hall recall the Crystal Palace of the Great Exhibition Held in Hyde Park in 1851 and it is already popularly referred to as the ‘Leipzig’ or ‘Saxon Crystal Palace’. It is an 80 metre wide, free-spanning glass barrel structure, 244m long and 30m high, which captivates, not only through its dimensions, but also through its technology. This was the first time a hall of this size has been built in Europe with a glass shell suspended from point fixings. The green areas and bodies of water through which the glass-covered foot-bridges pass on the exhibition level form an information and communications forum and create a climatic envelope at the same time.

The architects and engineers responsible (von Gerkan, Marg & Partner, Hamburg, Polònyi, Cologne/ Ian Richie Architects, London) have succeeded in creating an external supporting framework with such a light appearance that neither the attractiveness nor the functioning of the glass shell suspended underneath is adversely affected. The design concept adopted was based in the original tenders modified by the Mero/ Seele executive consortium.

One particular charm of the structure, which has a total construction weight of approximately 2,300t lies in the combination of steel and glass materials. The two form a structural unity. The frame-work consists of a single-layer tubular structure (grid size approximately 3m x 3m), reinforced by a curved binder every 25m.

Professor Volkwin Marg, of the architects, von Gerkan, Marg& Partner, Hamburg speaking as the architects in charge, gave an impressive presentation on the project. “The way the glass is now, is really technically unique, a kind of world’s first. The glass arch for the new exhibition challenged us, and our framework planner, Stefan Polònyi, to find new architectural and structural solutions”.

According to Professor Marg, the London architect Ian Richie was brought in at an early stage to help with the design because of his particular know-how and his wide experience in the design of glass structures. However, Ritchie, who has also designed glass and glass structures, had emphasised that the steel should be protected against corrosion by means of hot dip galvanizing.

“The accuracy of the steel structure is dependent on the accuracy of fabrication, which increases with decreasing sizes of fabricated units. The units could not be interconnected by site-welding. The aesthetics of the structure required hidden bolt connections. Because of the difficulty of ensuring an absolute hermetic seal to all the joints and bolting access holes, the inner surface of the tubular structure had to be protected” said Ritchie.

He added: “The most economical solution to this problem was hot dip galvanizing, which gives sufficient internal protection together with excellent external protection for the structural tubes; the structural components became significantly less sensitive to edge damage during erection, which is difficult to repair. The sizes of the units were chosen to suit the size of the galvanizing bath (approximately 12m x 2m) available at the new galvanizing plant close to Leipzig”.

Professor Marg: ”The co-operation with Ritchie resulted in a glass barrel with no expansion joints, 244m long and 80m wide, made of completely colourless 1.5 x 3m large glass plates. The glass mountings for the frog fingers and all the design details and seals were developed by Ian Ritchie and his people, in close collaboration with the industry and with the operational consortium formed by the Mero and Seele Companies.”

Professor Stefan Polònyi explained in detail the high cost of the framework planning for the central glass hall. He explained that the design process had been an interesting experience “in which, with regard to acquiring the technical data encompassing all the loadings and the method of construction, we came very close to the limits of what could be achieved. So the central glass hall is a remarkable structure in this respect as well”.

The steel supporting structures of the gable end walls and the curves of the barrel consist of individually galvanized tubes with an additional silver-grey paint coating. This duplex system combining galvanizing with an organic coating gives the steel optimal protection against corrosion. This method of corrosion protection is basically standard for all Mero structures. It is used as a matter of course by them provided that it is technically feasible and that the customer has no objections.

The elements of the entire structure are naturally typical of Mero. The laminated panes of glass – approximately 15m x 3m each – are each fastened under the structure at only four points and sealed with silicon profiles.

This technology calls for a high degree of manufacturing precision and for appropriate measures which can absorb the deformation arising from stress without any impairment in functioning. 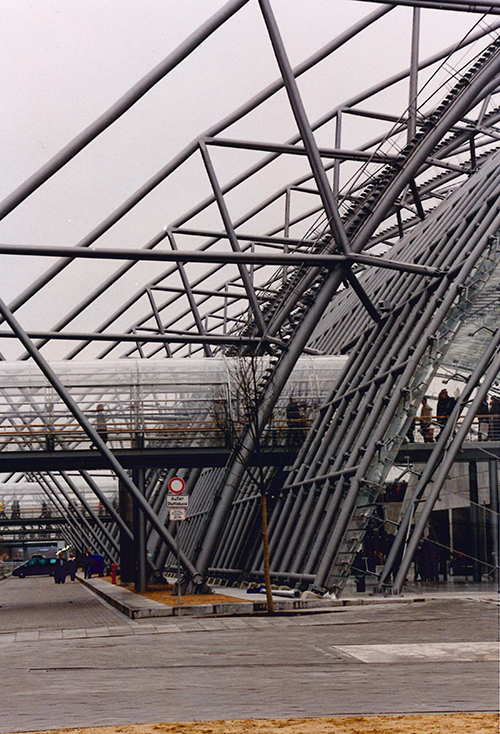 Details on this point were provided by Dr, Herbert Klimke from the technical department of Mero- Raumstruktur in Würzburg: ”The connection system is one of the design highlights. The intersecting tubes in the grid shell were welded together, with the curved tubes being placed on top of the longitudinal tubes. The longitudinal tubes were designed to be thick enough at the joints not to give under the pressure of the curved tubes. To bring this about, it was sufficient to insert a short tube node. The left-hand and right-hand connecting lengths were linked using cover strips and preponderantly, with a few long bolts, a technique taken from the Mero style of node.”

The panes of glass are made of double-glazed safety glass, each pane being 8-10mm thick, and glued together with the help of two transparent (PVB) films, each O.76mm thick. The panes of toughened safety glass are dimensioned in such a way that if a panel is broken, or if any additional stresses arise due to wind and snow, the additional loading can be coped with by the surrounding panels. 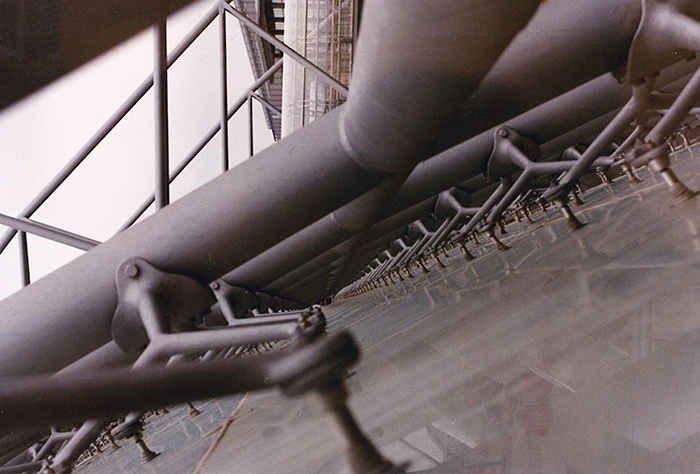 Parts of the panel surfaces on the South side are coated, which reduces the total energy absorption. For natural temperature control in the hall, not only are air intake and air extraction apertures provided, but there is also an artificial sprinkler system for the outside glass surfaces.

Five mobile maintenance and cleaning machines platforms, which can be driven under the bottom flanges of the lattice girders, have been installed.

As with the barrel, the support framework of the gable end walls is on the outside of the structure. To emphasis the barrel structure more strongly, the main structure of the gable walls is ring-form. The radial staves required are designed to be as thin as statically possible. The gable walls are clad with panels flush with the surface in the lower areas. The door installations, which have no frames and consist entirely of glass, are in this area too.

Altogether there are four footbridges crossing the hall, each with a walking width of 4m. They are covered with panes of toughened safety glass, which are fastened at various points, like the glass barrels. The design of the frameless ventilation shutters is also completely new.