Rust is the corrosion product formed when steel reacts with oxygen and water. The corrosion reaction is generally denoted as follows:

Although rust is primarily hydrated ferric oxide, it also contains other compounds. Rusts have a wide range of composition, depending on the conditions under which they are formed. Typical compositions cannot, therefore, be given but analyses of a range of rusts have indicated that air­formed rusts generally contain about 5 % of compounds other than Fe2O3 H2O.

These derive in part from the steel, which contains elements other than iron, e.g. copper, silicon and manganese, and in part from atmospheric contaminants and pollutants, mainly sulphates and chlorides, although other pollutants such as ammonium salts are also generally present in rust.

The constituents formed by reactions between steel and pollutants such as sulphur dioxide, sometimes called ‘iron salts’ or ‘corrosion salts’, cause most problems for coatings applied onto rusting steel surfaces.

Sulphur dioxide in the air reacts with moisture to form acids. Weak sulphuric acid solutions react with the steel to form ferrous sulphate. These salts tend to form in shallow pits at the steel surface and the corrosion process is such that the sulphates tend to move inwards to the anodic areas, which are likely to be in crevices, the bottom of pits, etc. 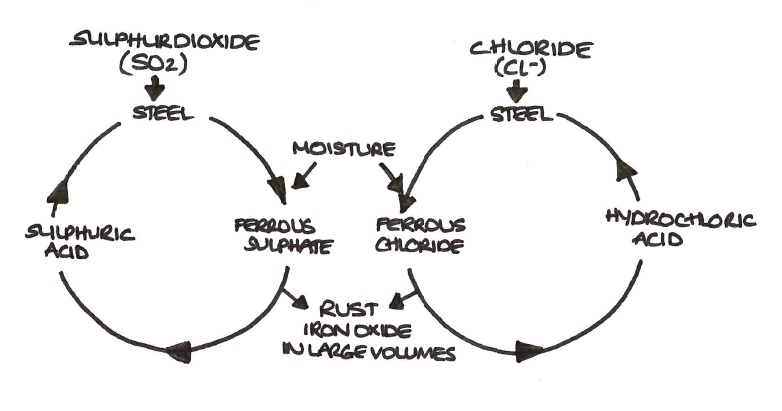 The cycle process of rusting

The salts are also not ‘rust’ coloured, being white or light coloured. They are very difficult, if not impossible, to remove with tools such as scrapers and wire brushes and are often difficult to remove even with blast-cleaning. The presence of salts such as ferrous sulphate leads to rather complex reactions involving the regeneration of the sulphuric acid from which they were formed. This, in turn, causes further corrosion and the production of more rust (see Figure below). As rust has a considerably greater volume than the steel from which it is produced, this can lead to disruption of any coating applied over it by cracking, blistering and eventually flaking.

Ferrous sulphate is the salt most commonly found in rusts formed in industrial-type atmospheres. Near the coast, chlorides are likely to be a greater problem. The reactions arising from the two types of salt, sulphate and chloride, are not necessarily the same. Chlorides are hygroscopic, i.e. they absorb moisture. It has been shown in laboratory tests5 that whereas rusting may occur at relative humidities below 70% with sulphates, the presence of chlorides in rust can result in corrosion of the steel at relative humidities as low as 40%. Chlorides may, therefore, be a greater immediate problem than sulphates.

There are many ways to protect steel from rusting. An important step within the process is to ensure good surface preparation has taken place before application of the protective system.